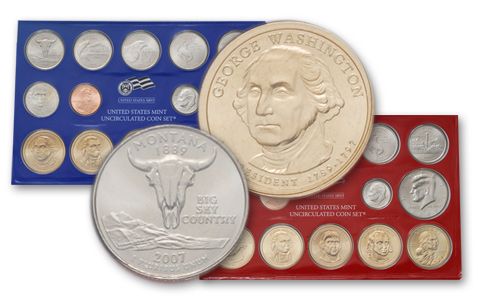 Availability: Available for Order
This item will ship 06/07/21
Item #
182929
Add to Wish List Add to Wish List Wishlist is for registered customers. Please login or create an account to continue. Add to Compare

About the sets: The coins in the 2007-PD Mint Sets were Uncirculated pieces pulled from regular production runs, thus the quality of the individual coins varies widely from set to set and even within a set.

The 2007-PD Mint Set contained twenty-eight coins, including the following:

About the sets: The 2007-PD Mint Set is highly collectible for two major reasons: First, it features the very first Presidential Dollars from the new ongoing U.S. Mint series, in which four new Presidential Dollar coins were issued annually. Each Presidential Dollar was issued in the order of Presidential terms of office. They feature the same golden alloy used for the Sacagawea Dollar. The second reason for this set's collectability is that it marks the first appearance of the colorful blister pack presentation folders, which replaced the Mylar® packaging of the past.

Nancy Pelosi becomes the first female Speaker of the United States House of Representatives. For the first time in the 23-year history of the modern version of the popular game show Jeopardy!, a three-way tie occurred. Bob Barker airs his last episode of The Price is Right. The Texas Rangers score thirty runs in one game, setting the modern (post–1900) MLB record for most runs by one team in a single game.

There is a Taliban suicide attack at Bagram Air Base in Iraq, while Vice President of the United States, Dick Cheney, is visiting. Twenty-three people are killed, but Mr. Cheney is not injured. French high-speed passenger train, the TGV, reaches a top speed of 574.8 km/h (357.2 mph), breaking the record for the world's fastest conventional train. The final book in J. K. Rowling's Harry Potter series - Harry Potter and the Deathly Hallows - is released, and sells over 11 million copies in the first 24 hours, becoming the fastest selling book in history.