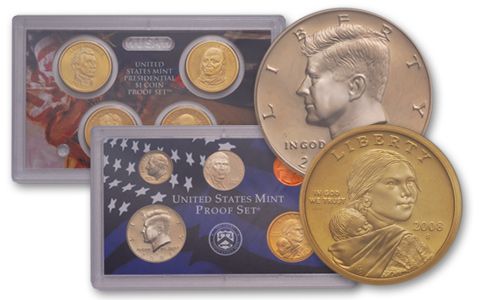 Availability: In Stock
This item will ship within 2 business days.
Item #
222279
Add to Wish List Add to Wish List Wishlist is for registered customers. Please login or create an account to continue. Add to Compare

About the sets: All coins in the 2008-S Proof Set were intended to have a Cameo or Deep Cameo Finish. The 2008 Proof Set is notable for containing the final coin in the nine-year Sacagawea Golden Dollar program. Starting in 2009, a new Native American Dollar series was unveiled.

Original packaging: The 2008-S Proof Set comes in three cases. One case contains the Cent, Nickel, Dime, and Half Dollar; one contains the final five 50 States Quarters, and the third case houses the four Presidential Dollars. The coins are inserted into holes in a cardboard holder, and then sealed inside a two-piece, clear plastic case. Two of the holder inserts feature a blue flag design, while the Presidential Dollar holder features a full-color patriotic theme. The cases and certificates of authenticity were inserted into colorful, card-stock box with the head of the Statue of Liberty printed on the left side.