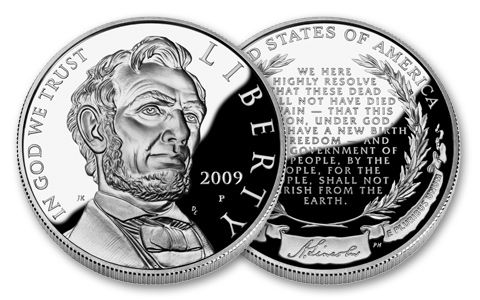 Availability: Out of Stock
This item is currently Out of Stock. Please sign up to be notified if this product becomes available.
Item #
184557
Add to Wish List Add to Wish List Wishlist is for registered customers. Please login or create an account to continue. Add to Compare

Noble Words for Your Collection

This 2009 Abraham Lincoln Bicentennial Silver Dollar Proof from the U.S. Mint features a portrait of the 16th President on the obverse and one of the verses from his Gettysburg Address on the reverse. This popular one-year-only commemorative silver dollar was released in 2009 to celebrate the 200th anniversary of Lincoln’s birth and proved to be so popular that both the uncirculated and this Proof version quickly sold out!

It should have come as no surprise that these coins would be so popular. After all, Lincoln is ranked as one of the best Presidents ever to serve the United States. His signature moment was the delivery of his famous Gettysburg Address at the dedication of the Soldiers’ National Cemetery in Gettysburg, Pennsylvania on November 19, 1863 nearly five months after the famous battle was fought there. While Lincoln himself didn’t think much of the speech, historians have hailed the monumental oration as one of the most famous speeches in American history. Talk about short and sweet; the famous address lasted barely two minutes!

A portion of the proceeds from the sale of these coins went to the Abraham Lincoln Bicentennial Commission to help fund the Lincoln Bicentennial celebration as well as for continued study into the former president’s life. While 375,000 proofs were struck, the fact that they were sold out nearly a decade ago makes finding these commemorative silver proofs tough today. Secure yours now!

These Lincoln Bicentennial Commemorative $1 Silver Proofs are among the most popular modern commemoratives released by the U.S. Mint. Don’t miss this chance to add one of these incredible coins to your collection!