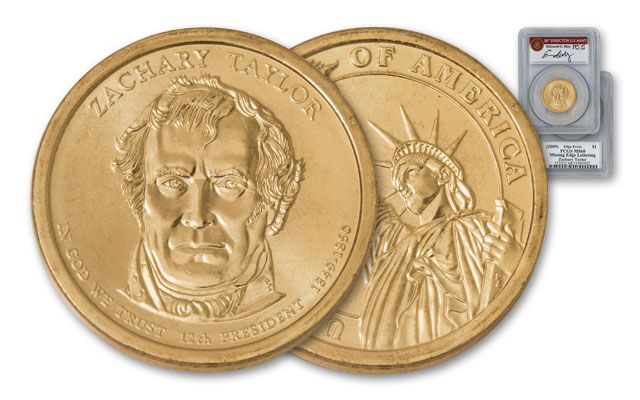 Availability: Out of Stock
Discontinued Product
Item #
265166
Add to Wish List Add to Wish List Wishlist is for registered customers. Please login or create an account to continue. Add to Compare

This 2009 Taylor Presidential Error Dollar is among those missing the edge lettering. Each coin is authenticated and encapsulated by Professional Coin Grading Service (PCGS) and also features a hand-signed signature of the 38th Mint Director, Edmund C. Moy. An added important feature of this coin is that it grades PCGS Mint State-68 (MS68), one of the highest grades achieved by any of the Presidential Error coins.

In 2007, the U.S Mint released its first "Golden Dollars" honoring all of our country's Presidents. The dollar honoring Taylor was among those in the third year issued in 2010. Zachary Taylor was the 12th President of the United States, serving from March 1849 until his death in July 1850. Before his presidency, Taylor was a career officer in the U.S. Army, rising to the rank of Major General. Taylor died suddenly of a stomach-related illness in July 1850, so he had little impact on the sectional divide that led to the Civil War a decade later.

Don't miss your opportunity to secure this high-grade example from a significant hoard of Presidential Error coins.