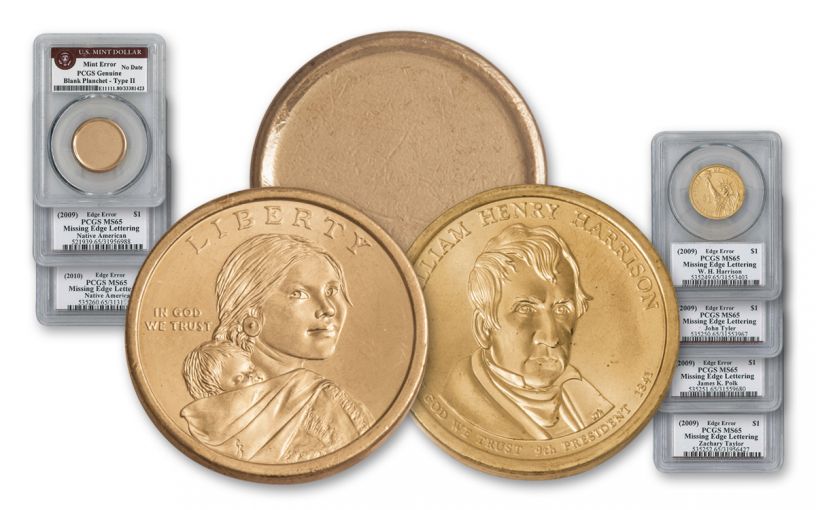 Availability: Out of Stock
This item is currently Out of Stock. Please sign up to be notified if this product becomes available.
Item #
313327
Add to Wish List Add to Wish List Wishlist is for registered customers. Please login or create an account to continue. Add to Compare

When the U.S. Mint strikes Presidential and Native American Dollars, they start by striking the designs into the obverse and reverse, and then they strike the coins again to give them their edge lettering. However, a number of each type of dollar missed that crucial second step, and we’ve managed to assemble a number of exclusive sets hand-signed by Edmund C. Moy, 38th Director of the U.S. Mint!

How did these coins escape detection? While some simply managed to sneak past quality control, a number escaped detection through a more nefarious scheme. That’s because from 2007 until 2011, a number of Presidential Dollars were stolen by a U.S. Mint security guard before they could receive their edge lettering. This guard hoped to sell them for a hefty profit, but was caught instead! Now legal to own, these Presidential Error Dollars, along with the Native American Error Dollars, make for some incredible sets.

Now you can secure an exclusive six-piece set containing Presidents Harrison, Tyler, Polk and Taylor, a 2009 Native American Dollar and a fascinating extra -- a blank U.S. Mint Error Dollar! Each exclusive coin comes graded by the Professional Coin Grading Service (PCGS) as being in Mint State-65 (MS65) condition, sealed with the hand-signed signature of Edmund C. Moy! The blanks also come certified as Genuine by PCGS.

Error coins are always unique and popular. Now you can secure the 2009-2010 $1 Presidential and Native American Error Six-Coin Set personally signed by Edmund C. Moy. Make no mistake about it, these are coins you definitely want in your collection!