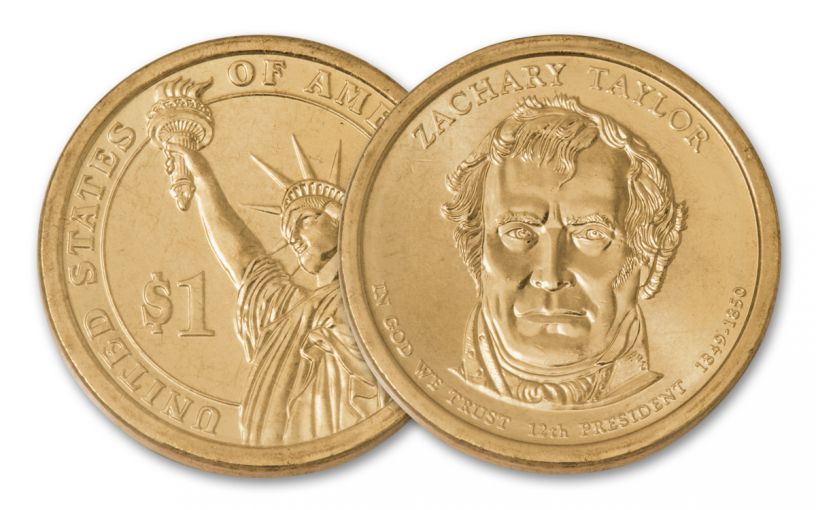 Availability: Out of Stock
This item is currently Out of Stock. Please sign up to be notified if this product becomes available.
Item #
265119
Add to Wish List Add to Wish List Wishlist is for registered customers. Please login or create an account to continue. Add to Compare

Whoops! Missing Edge Lettering 2009 Taylor Presidential Dollar Is Yours if You Act Fast

From first glance, there’s nothing wrong with this 2009 Zachary Taylor Presidential Dollar. But take a look along the edge and your collector’s eye will widen with surprise – these are supposed to have edge lettering! How could this have happened, you ask? While it’s believed that some of the coins may have simply slipped past quality control, it has also been proven that some of these “error” coins were actually stolen – right out from under the noses of U.S. Mint officials!

The U.S. Mint revised a decades-old process of adding edge lettering when the Presidential Dollars were first struck in 2007. The edge lettering was supposed to contain the year, the mintmark and the motto E PLURIBUS UNUM. It mostly worked fine, but a small number of coins missing the edge lettering escaped the mint. This 2009 Taylor Dollar was one of those so-called “Smooth Edge Dollar” error coins!

Thankfully these coins were recovered, and the thief who pulled off the crime has been held responsible for his actions. More than just a simple heist, however the nefarious actions of this individual also created a small subset of missing edge-letter Taylor Dollars! We’ve managed to secure a small hoard of these coins, and now you can add one of these historic pieces to your collection in Brilliant Uncirculated (BU) condition. Who knows? Maybe the very coin you receive was one the thief held in his own hand, admiring his stolen goods!

It's rare to find such a glaring error on a coin struck at the U.S. Mint. Add this 2009 Zachary Taylor Missing Edge Lettering Presidential Error Dollar to your collection before our small supply is gone!

Error coins are always unique and popular. Now you can secure the 2009 Zachary Taylor Presidential Dollar Missing Edge Error Coin. Make no mistake about it, this is a coin you want in your collection!