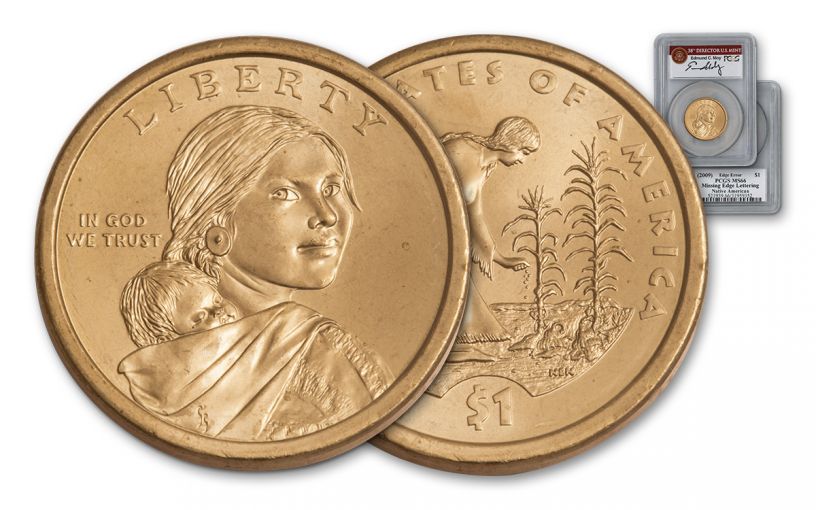 Availability: In Stock
Discontinued Product
Item #
264547
Review this product
Add to Wish List Add to Wish List Wishlist is for registered customers. Please login or create an account to continue. Add to Compare
Complete your collection with one of these:
Product Description

A U.S. Mint Mistake is Your Next Great Find: the 2009 Native American Dollar with Missing Edge Lettering

The beautiful Native American Dollar series generated more than 71 million coins in 2009, the vast majority of them in pristine U.S. Mint-approved condition. But, a tiny fraction of that 2009 mintage - only .00791% - featured a noticeable error: no lettering along the edge of the coin. Given the technology of the modern U.S. Mint as it strikes massive quantities of coins each year, error coins are exceptionally rare and hard to find. But, you can get this 2009 Native American Dollar with Missing Edge Lettering exclusively at GovMint.com.

And that's not the only unique feature of your coin - its packaging is one of a kind as well. Each Native American Dollar is graded by the Professional Coin Grading Service (PCGS) as MS66, and is hand-signed by Edmund C. Moy, the 38th Director of the U.S. Mint.

In 2009, the U.S. Mint began this series featuring designs celebrating the important contributions made by Native Americans to development of the United States. The obverse of the coin continued to feature the image of Sacagawea, whose likeness was first minted in the Dollar series in 2000. In this image, the Native American Shoshone woman carries her son Jean Baptiste on her back as she glances over her right shoulder. The obverse also features the inscriptions "LIBERTY," and "IN GOD WE TRUST."

The reverse of the coin features a Native American woman planting corn, bean and squash seeds. The rich agriculture theme is a key element of the 2009 Native American Dollar, representing the importance of agriculture to the Native Americans and their emphasis on living with the land and respecting natural resources. Surrounding this image is the inscription "UNITED STATES OF AMERICA" and the denomination of "$1."

The lettering intended to go on your coin was "E PLURIBUS UNUM," the date "2009," the mint mark and thirteen stars. Instead, the coin has a perfectly smooth edge. With a grade of MS66 your coin will arrive at your door with the same luster that it had the day it was struck. This beautiful coin contains no large marks that would detract from its appeal, and is ready for you to display and share the story of this rare U.S. Mint error. But you must act now to get yours - quantities are limited of these hand-signed coins, and they're going fast!