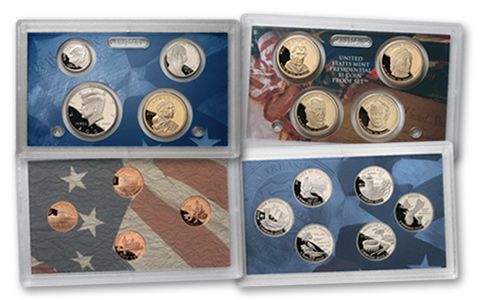 Availability: In Stock
This item will ship within 2 business days.
Item #
222280
Add to Wish List Add to Wish List Wishlist is for registered customers. Please login or create an account to continue. Add to Compare

Original packaging: The 2009-S Proof Set comes in four cases. One case contains the Nickel, Dime, Half Dollar, and Native American Dollar; one contains the six District of Columbia and Territory Quarters, the third case houses the four Presidential Dollars, and the fourth case displays the four Lincoln Bicentennial Cents. The coins are inserted into holes in a cardboard holder, and then sealed inside a two-piece, clear plastic case. The cases and certificate of authenticity were inserted into blue and white card-stock box.