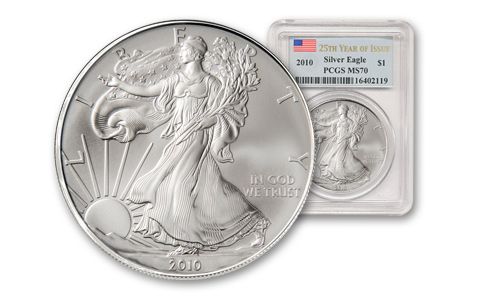 Availability: Out of Stock
Discontinued Product
Item #
228547
Add to Wish List Add to Wish List Wishlist is for registered customers. Please login or create an account to continue. Add to Compare
Product Description

Congress authorized the first ever U.S. Mint Bullion program in 1985. By U.S. law, Silver Eagles were designated to contain one full Troy ounce of 99.93% silver. They were first minted in 1986. The obverse of the Silver Eagle pictures Adolph Weinman's very popular Walking Liberty design, the same image that was pictured on circulating silver half dollars produced by the U.S. Mint between 1916 and 1947. 2010 was the 25th anniversary of the Silver Eagle. We've managed to locate a small number of these 2010 25th Anniversary Silver Eagles graded by Professional Coin Graded Service (PCGS) as perfect Mont State-70 (MS70), with the 25th Anniversary designation on the label. These perfect coins are the highest grade available. Add this perfect Silver Eagle to your collection today! • One troy ounce, 31.101 grams of silver • 40.6 mm reeded edge • PCGS graded MS70