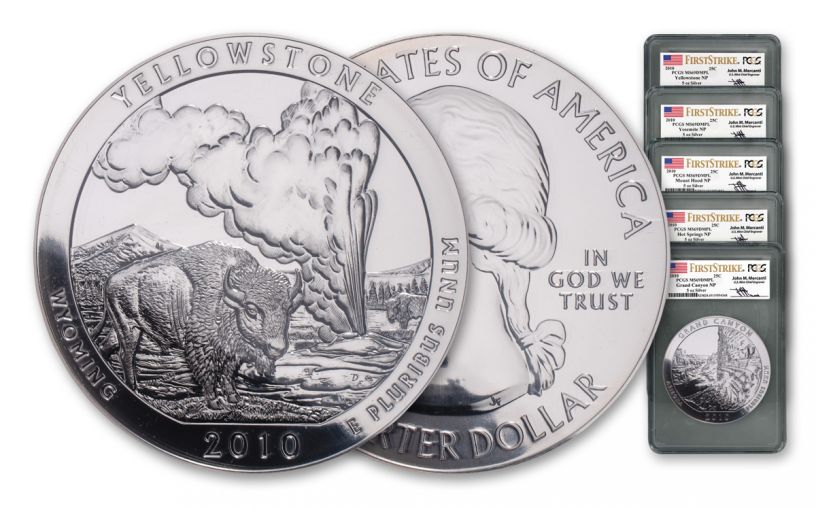 Availability: Call-In Only
This item is only available on a Call-In basis. Please call 1-800-510-6468 to speak to a representative.
Item #
342339
Add to Wish List Add to Wish List Wishlist is for registered customers. Please login or create an account to continue. Add to Compare

The successor to the U.S. Mint’s mega-hit States Quarters program, the America the Beautiful Quarters® program brings one-year-only designs that feature some of the nation’s most beautiful parks and monuments. In 2010, the U.S. Mint began striking its first-ever five-ounce, three-inch, 99.9% fine silver bullion coin series – massive versions of the America the Beautiful quarters!

Each is still official U.S. legal tender and allows you to examine each beautiful design in minute detail. This set brings together all five of the first-year 2010 releases – Arkansas: Hot Spring National Park, Wyoming: Yellowstone National Park, California: Yosemite National Park, Arizona: Grand Canyon National Park and Oregon: Mt. Hood National Forest. Each has been certified by the Professional Coin Grading (PCGS) as being in near-perfect Mint State-69 Deep Mirror Proof Like (MS69 DMPL) condition, a distinction that means your almost-flawless coins will showcase impressive full strikes and indistinguishable imperfections – well above and beyond the quality of the vast majority of coins in the series.

In addition, PCGS has certified that each coin is a First Strike (FS), meaning that your coins were among the first struck by the mint and were verified within the first 30 days of issue! All five of your coins have also been sonically sealed in acrylic coin holders and include another exciting feature: a label personally signed by John Mercanti, the U.S. Mint’s 12th Chief Engraver!

Each if these coins are struck for only 10 weeks and 10 weeks only so that the mintages are relatively low. In fact, the combination of their limited editions, grade and Mercanti signature means that only seven of these sets exist! Be one of the few collectors to call it your own and secure your set today!

The America the Beautiful series has proven extremely popular since it began back in 2010. Although these coins are considered bullion, each new release is available for only a short time long, so add this set of Mint State-69 Deep Mirror Proof-Like (MS69 DMPL) First Strike (FS) 2010 America the Beautiful Five-Ounce Silver Coins to your collection before it’s too late!