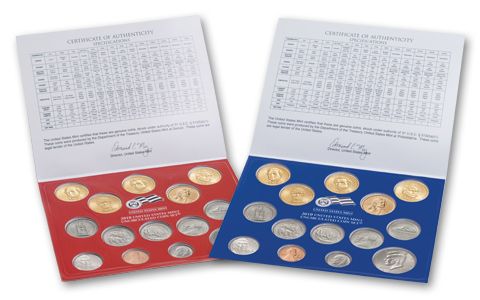 Availability: In Stock
This item will ship within 2 business days.
Item #
182932
Add to Wish List Add to Wish List Wishlist is for registered customers. Please login or create an account to continue. Add to Compare

About the sets: The coins in the 2010-PD Mint Sets were Uncirculated pieces pulled from regular production runs, thus the quality of the individual coins varies widely from set to set and even within a set.

The 2010-PD Mint Set contained twenty-eight coins, including the following:

About the sets: The 2010-PD Mint Set featured the first five quarters in the new America the Beautiful™ Quarter program - successor to the hugely-popular 50 State Quarter program. It is also highly-collectible for its inclusion of the first-ever Lincoln Dollar, part of the ongoing Presidential Dollar series.

The Tea Party movement hosts their first convention in Nashville, Tennessee. On April 20, a British Petroleum's oil rig exploded in the Gulf of Mexico, killing 11 workers and commencing months of oil leaking unrestrained into the ocean. WikiLeaks publicly releases the first of thousands of confidential documents sent by U.S. diplomats. The San Francisco Giants defeat the Texas Rangers to win their first world series in 56 years.

On Tuesday, 12 January 2010, a massive earthquake of magnitude 7.0 hit Haiti killing almost 250,000 people, injuring 300,000 and more than one million people were made homeless. The United States competes at the Winter Olympics in Vancouver, British Columbia and wins 9 gold, 15 silver, and 13 bronze medals. Volcanic ash from one of several eruptions beneath Eyjafjallajökull, an ice cap in Iceland, disrupts air traffic across northern and western Europe.