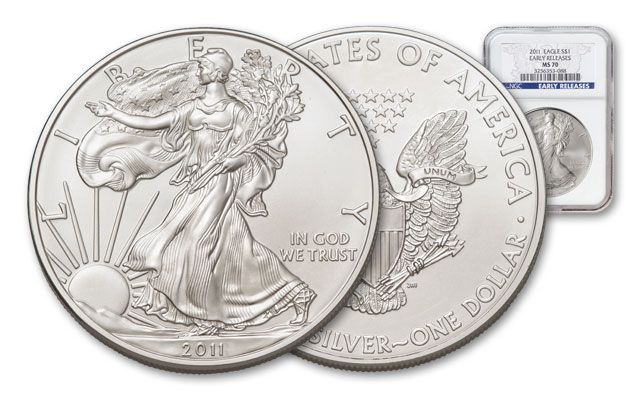 Availability: Out of Stock
Discontinued Product
Item #
222081
Add to Wish List Add to Wish List Wishlist is for registered customers. Please login or create an account to continue. Add to Compare

These 2011 Silver Eagle Dollars grade Mint State-70 Early Release (MS70 ER) by Numismatic Guaranty Corporation (NGC). It's now been five years since these Eagles were released. Past-dated Silver Eagles can be difficult to find, because collectors sock them away when they are released and they don't often come back onto the market.

This is even truer for NGC perfect-graded Silver Eagles designated 'Early Release,' because after the first 30 days of sale, very few submissions can get the ER designation.

That's why when we were offered a small number of 2011 MS70 ER Silver Eagles we snapped them up, so you can add this tough coin to your collection.