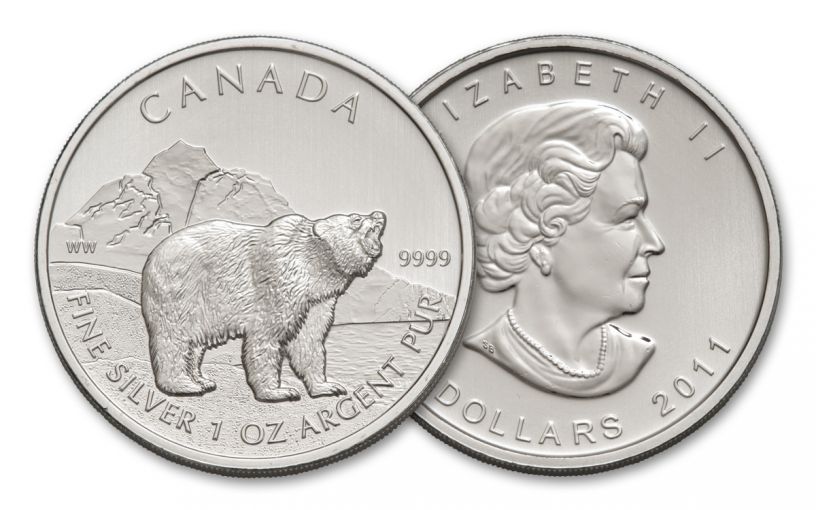 As it roams over its range of 1.15 million square miles, living up to 30 years or more, the grizzly bear is one of the most feared and revered wilderness animals—a true symbol of the Canadian Rockies. Small wonder that the grizzly bear was chosen as the subject for the third release in the Royal Canadian Mint’s six-coin "Wildlife Series."

Introduced in 2011, this wildlife series of coins have become perennial market favorites, and feature six different Canadian wildlife species: Timberwolf, Grizzly, Cougar, Moose, Pronghorn Antelope and Wood Bison. These finely crafted bullion coins are struck from the same .9999 pure silver as the Royal Canadian Mint's world-famous Silver Maple Leaf bullion coins. Now you can celebrate the beauty of the Canadian Rockies and add to your own wildlife collection with the 2011 $5 1-oz Silver Canada Grizzly coin.

You'll instantly feel the magnificence of your Canada Grizzly coin as you hold it in your hand, with its full weight of 31.1 grams and impressive 38 mm-diameter size. But that's only the start of what makes this coin a must-have for the serious collector.

From the wilds of Canada directly to your doorstep, the $5 Silver Canadian Grizzly Coin is available now…but competition is fierce. Get yours from GovMint.com before they're gone!