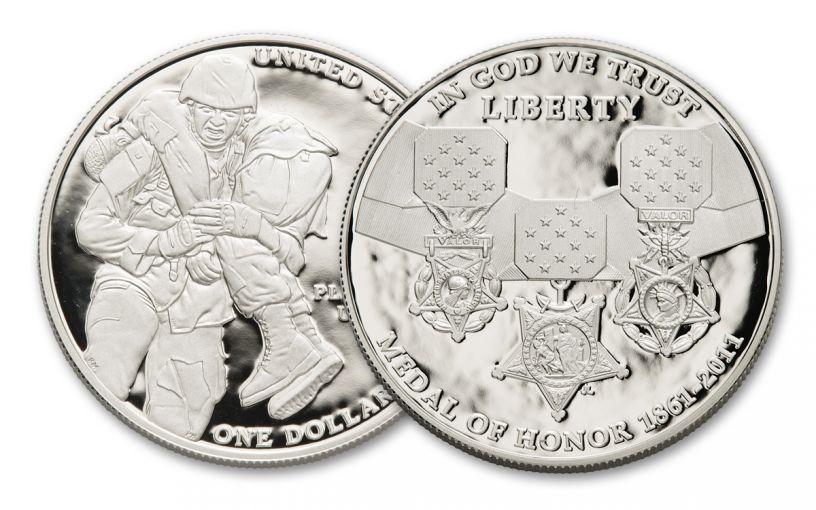 Availability: In Stock
This item will ship within 2 business days.
Item #
313238
Add to Wish List Add to Wish List Wishlist is for registered customers. Please login or create an account to continue. Add to Compare

The Medal of Honor is the oldest continuously issued combat decoration of the United States Armed Forces. The medal is given out to recognize distinguished acts of bravery among all branches of the military and so revered that it is normally given out only by the president. Through 2018, just 3,522 medals have ever been awarded since the medal was first introduced in 1861. Among those who have received the medal are William F. “Buffalo Bill” Cody, President Theodore Roosevelt, Alvin C. York, Charles Lindbergh and Audie Murphy.

In 2011, to honor the 150th anniversary of the establishment of the nation’s highest award for valor in action, the U.S. Mint released this commemorative silver dollar. Struck in 90% silver, the legal-tender coin features an action-packed design of a modern-day soldier carrying a wounded buddy across his shoulders. The image was the work of designer Richard Masters and sculptor Phebe Hemphill. The coin’s obverse was designed by Jim Licaretz and shows the three modern Medals of Honor for the Army, Navy and Air Force.

Pay tribute to our nation’s bravest warriors with the 2011-P $ Medal of Honor Silver Commemorative Proof. Click one to your cart today!