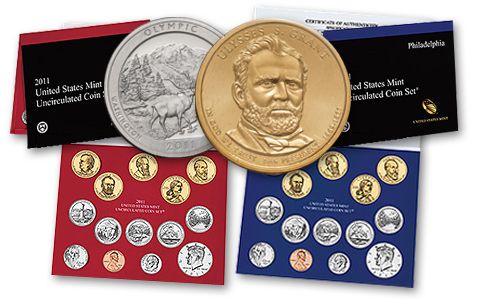 Availability: In Stock
This item will ship within 2 business days.
Item #
181624
Add to Wish List Add to Wish List Wishlist is for registered customers. Please login or create an account to continue. Add to Compare

About the sets: The coins in the 2011-PD Mint Sets were Uncirculated pieces pulled from regular production runs, thus the quality of the individual coins varies widely from set to set and even within a set.

The 2011-PD Mint Set contained twenty-eight coins, including the following:

About the sets: The 2011-PD Mint Set contains five new issues in the America the Beautiful™ Quarter program, as well as a one-year-only Native American Dollar design depicting the passing of the peace pipe between early Plymouth Bay settlers and the Great Wampanoag Nation in 1621.

The quiz show Jeopardy airs the victory of IBM's artificial intelligence program Watson over two of the show's most successful contestants. Frank Buckles, America's last surviving World War I veteran and one of only three verified surviving veterans of the war worldwide, dies at the age of 110. Standard & Poor's downgrades its outlook on long-term sovereign debt of the United States to negative from stable for the first time in history. Occupy Wall Street: Thousands march on Wall Street in response to high unemployment, record executive bonuses, and extensive bailouts of the financial system.

Osama bin Laden, the founder and leader of the militant group Al-Qaeda and the most-wanted fugitive on the US list was killed during an American military operation in Pakistan. The last American troops are withdrawn from Iraq, ending the Iraq War. North Korean dictator Kim Jong Il dies.