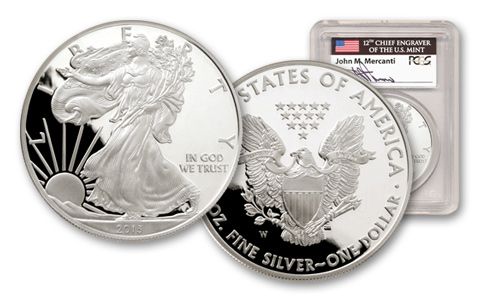 Availability: Out of Stock
This item is currently Out of Stock. Please sign up to be notified if this product becomes available.
Item #
242258
Add to Wish List Add to Wish List Wishlist is for registered customers. Please login or create an account to continue. Add to Compare

Millions of Silver Dollars bear his mark. Only a few bear his autograph!

The American Eagle Silver Dollar is a certified legend - and a runaway best seller! Over 300 MILLION have been snatched up by collectors and silver dollar lovers since they were first struck in 1986. Every single dollar features the mark of the U.S. Mint's 12th Chief Engraver, John Mercanti - the man who personally designed the famous heraldic eagle and shield reverse of this American silver masterpiece. Mr. Mercanti's 'JM' monogram appears to the right of the eagle's tail feathers. While over 300 million Silver Eagles bear John Mercanti's initials, this is the first time ever that he has personally autographed 2013 American Eagle Silver Dollars - both in Brilliant Uncirculated and highly-mirrored Proof editions. Each massive one Troy ounce 99.9% pure silver dollar has been certified and graded as near-flawless Proof 69 and Mint State 69 by Professional Coin Grading Service (PCGS).These classic legal tender American Silver Dollars feature a nearly 100-year-old design of Lady Liberty striding confidently forward while draped in a U.S. flag, while Mr. Mercanti's design depicts a majestic U.S. eagle, thirteen stars, and an American shield.