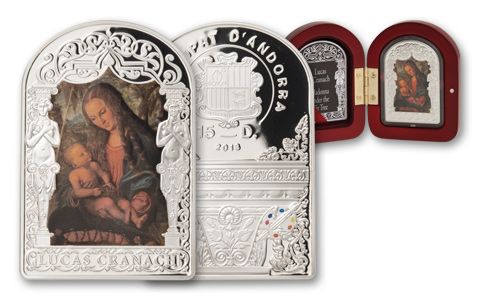 Availability: Out of Stock
This item is currently Out of Stock. Please sign up to be notified if this product becomes available.
Item #
243560
Add to Wish List Add to Wish List Wishlist is for registered customers. Please login or create an account to continue. Add to Compare
Product Description

An Iconic Piece of Renaissance Art!

The Renaissance produced some of the finest art in human history.  Much of the art was centered around religious figures, as the Roman Catholic Church remained a central cultural and political center of power. Religious paintings often depicted saints and other important figures in Catholicism, but none were more central than Jesus and His mother, the Blessed Mother. This work of art portrays Mary as the mother of the infant Jesus, as the two share a look that only a mother and child can. It humanizes the figure of Jesus, underscoring the traditional teaching that He was fully human, as well as divine.

Second only to Jesus himself, the Blessed Mother has played a crucial role in Christianity, and in particular Roman Catholicism. She has been rendered in countless artistic pieces that show her purity and humanity, especially as the mother of newborn baby Jesus. This coin shows a stunning rendering of the mother and child by Lucas Cranach. The fascinating history of this piece includes two stays in the Cathedral of St. John the Baptist in Wroclaw, Poland. Though the painting was spared from damage during World War II, it was damaged in hiding and forged and replaced by Siegfried Zimmer, who was hired to restore it in 1946. After nearly seventy years, it was returned to the Cathedral in 2012 by a collector. The Cathedral lost out on decades of holding this remarkable painting, and you will do the same if you don’t act now to add this coin to your collection!