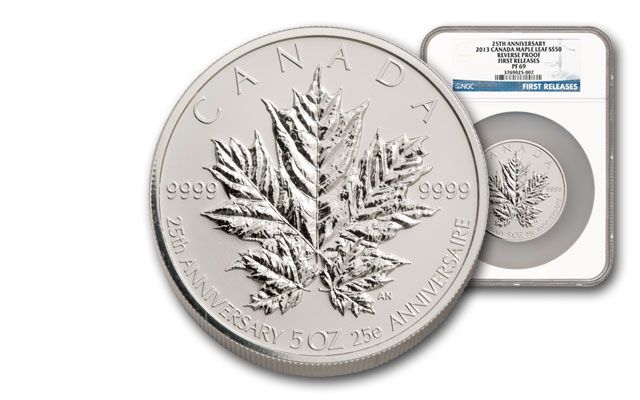 Availability: Out of Stock
This item is currently Out of Stock. Please sign up to be notified if this product becomes available.
Item #
247347
Add to Wish List Add to Wish List Wishlist is for registered customers. Please login or create an account to continue. Add to Compare

This 2013 coin is the first time the Royal Canadian Mint struck a reverse proof five-ounce Silver Maple Leaf. The reverse features the iconic maple leaf, while the obverse displays an embossed 50 dollars face value, the commemorative dates "1988" and "2013", the words "ELIZABETH II," and the effigy of Queen Elizabeth II from the coins first release in 1988.

Each coin has been certified and encapsulated by NGC. Coins arrive in a wooden presentation case - with Royal Canadian Mint's original case - and numbered certificate of authenticity.