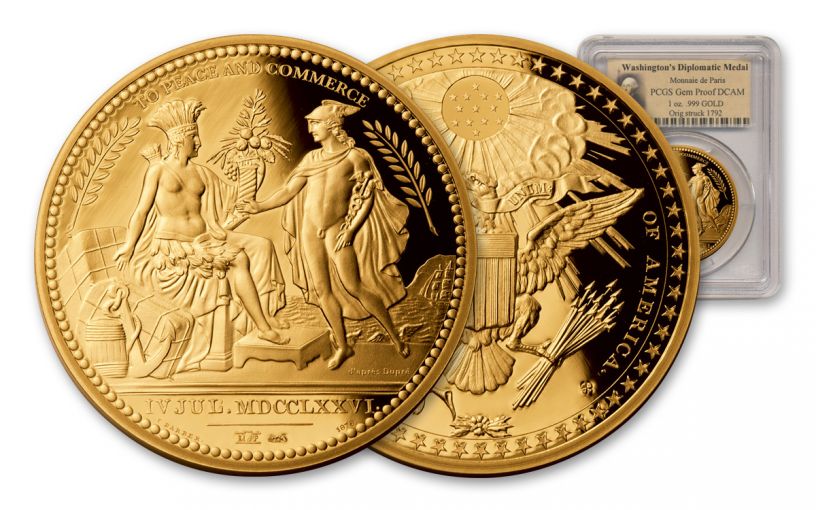 Availability: Out of Stock
This item is currently Out of Stock. Please sign up to be notified if this product becomes available.
Item #
247648
Add to Wish List Add to Wish List Wishlist is for registered customers. Please login or create an account to continue. Add to Compare

Shortly after George Washington took office as our first president, he approved a special medal that was to be given as a gift to visiting diplomats. It was a large 67 mm medallion that was a great big beautiful “Thank You” to those foreign diplomats to honor their services to the young United States of America.

The medal shows America as a Native American Princess, offering the bounty of the New World to Europe, represented by the Roman god Mercury. The reverse features the Great Seal of the United States. The medal was designed by the most famous artisan of the day, Augustin Dupré (1748-1833), who began his career in France as an engraver at the royal factory for weapons and ended his career as the 14th Engraver General of Currency at the Monnaie de Paris (The Paris Mint).  He is also remembered by many American coin collectors as the man who also designed the Libertas Americana medal for Benjamin Franklin in 1783.

To celebrate this historic masterpiece, The Paris Mint officially restruck Washington’s Diplomatic Medal in 2013, minting it in a full ounce of 99.9% pure gold. It’s the first time the mint struck the medal in proof condition. Each is graded by the Professional Coin Grading Service (PCGS) to be in Gem Proof condition and comes sealed with a special label in an acrylic holder, preserving its provenance forever.

This superb adaptation of the original Washington Diplomatic Medal by the same mint that struck the original is magnificent as a 99.9% gold proof. Don’t miss out – add one of these gems to your cart right now!