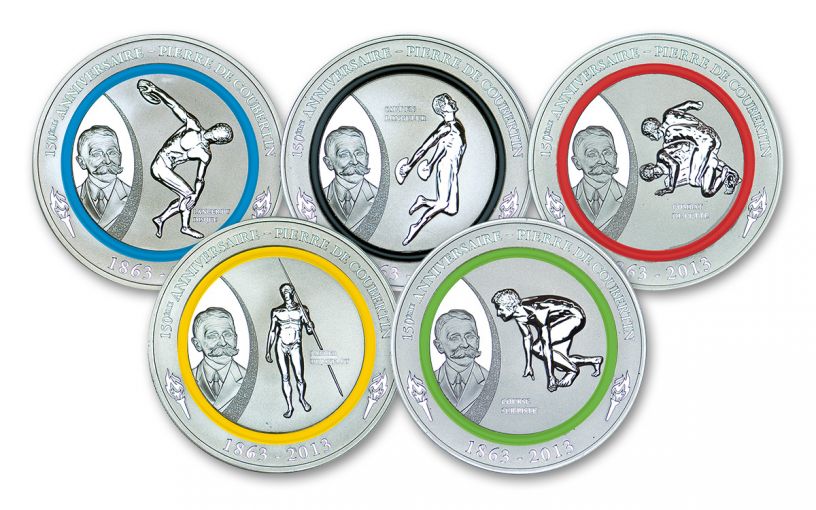 Availability: Out of Stock
This item is currently Out of Stock. Please sign up to be notified if this product becomes available.
Item #
242852
Add to Wish List Add to Wish List Wishlist is for registered customers. Please login or create an account to continue. Add to Compare

Celebrate the Man Who Founded the Modern Olympic Games!

Every two years, the world gathers together to watch the best athletes in the world compete in the Olympic Games. However, while the Olympics have a lineage that goes all the way back to the 8th century B.C., the modern-day games can be traced to the vision of one man -- Pierre de Fredy, Baron de Coubertin. From Coubertin's proposal in 1892 and subsequent congress in 1894, the International Olympic Committee was born, with the first games held two years later in Athens, Greece.

As if that wasn't enough, Coubertin also made another significant contribution to global culture. In a 1912 letter to a colleague, Coubertin sketched out a quick logo for the IOC's upcoming 20th anniversary -- five interlocked rings, each a different color. The colors of blue, black, red, yellow and green represented common colors among the flags of the world and each ring represented a different continent. It was a design that was too brilliant and symbolic for one event, with the IOC making it the official Olympic logo in 1915.

January 1st, 2013 marks the 150th anniversary of Coubertin's birth, and the country of Vanuatu is bringing the celebration with this 2013 Silver Pierre de Coubertin 5-Proof Set. Each legal tender, proof-struck coin is minted in 20 grams of 99.9% pure silver and features a portrait of Pierre de Coubertin. Each coin also depicts one of five Olympic events: wrestling, discus, javelin, long jump and sprint. In addition, a colorful enamel ring is minted into the coin, reflecting one of the five Olympic colors.

All five of these Pierre de Coubertin proofs will come individually secured in acrylic numismatic capsules and placed together in a luxuriously-crafted wood display box with glass lid along with a certificate of authenticity. Only 500 of these sets have been minted, and supplies are quickly disappearing. Get this unique collection for your own today!