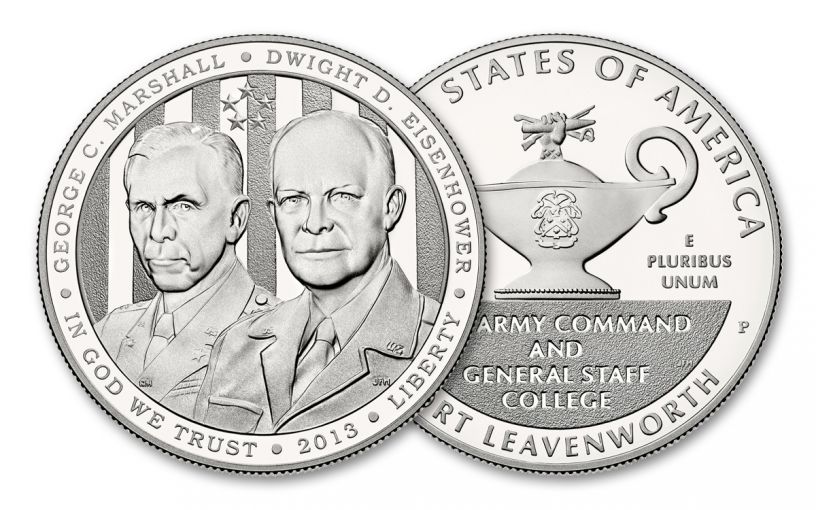 Availability: Out of Stock
This item is currently Out of Stock. Please sign up to be notified if this product becomes available.
Item #
341872
Add to Wish List Add to Wish List Wishlist is for registered customers. Please login or create an account to continue. Add to Compare

A Silver Commemorative Coin That Earns a 5-Star Rating

The CGSC has had a profound effect on many battles and conflicts throughout the world and been a key to America’s success from World War I and World War II all the way up through today’s global campaigns. To honor the 5-star generals who attended or taught at the CGSC, the U.S. Mint released this commemorative silver dollar in 2013 on the 132nd Anniversary of the institution’s founding.

Struck in 90% silver, the legal-tender coin is steeped in military tradition. Richard Masters’ obverse design shows the portraits of Generals George C. Marshall and Dwight D. Eisenhower against a striped flag-background and the five-star insignia. Along with Douglas MacArthur, Henry “Hap” Arnold and Omar Bradley, they are the only 5-star generals who attended or taught at CGSC. The coin’s reverse was designed by Joseph Menna and it shows an image of the Leavenworth Lamp, symbolic of the U.S. Army Command and General Staff College.

Pay tribute to America’s most noted soldiers with the 2013-P $1 Five-Star Generals Silver Commemorative Proof. Click one to your cart today!