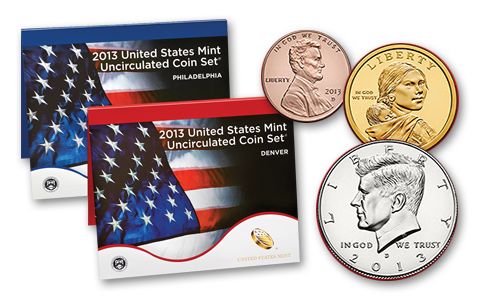 About the sets: The coins in the 2013-PD Mint Sets were Uncirculated pieces pulled from regular production runs, thus the quality of the individual coins varies widely from set to set and even within a set.

The 2013-PD Mint Set contained twenty-eight coins, including the following:

About the sets: The 2013-PD Mint Set contains five new issues in the America the Beautiful™ Quarter program, one of which depicts the popular national landmark, Mount Rushmore.

Two Explosions near the finish line of the Boston Marathon leave 3 people dead and 260 injured. A tip leads police to the backyard-stored boat at a home in the Boston suburb of Watertown, where the second suspect is captured. Following tensions between the Senate and the House of Representatives, Congress ultimately reaches a stalemate, resulting in a shutdown of all federal government departments deemed nonessential. The new, increased security $100 Bill is released into circulation.

Jorge Bergoglio is elected Pope Francis. The cache of documents released by NSA whistleblower Edward Snowden shed light on the extent of U.S. espionage operations in various parts of the world and threatened to damage U.S. relations with some key international players. Civil War rages in Syria.