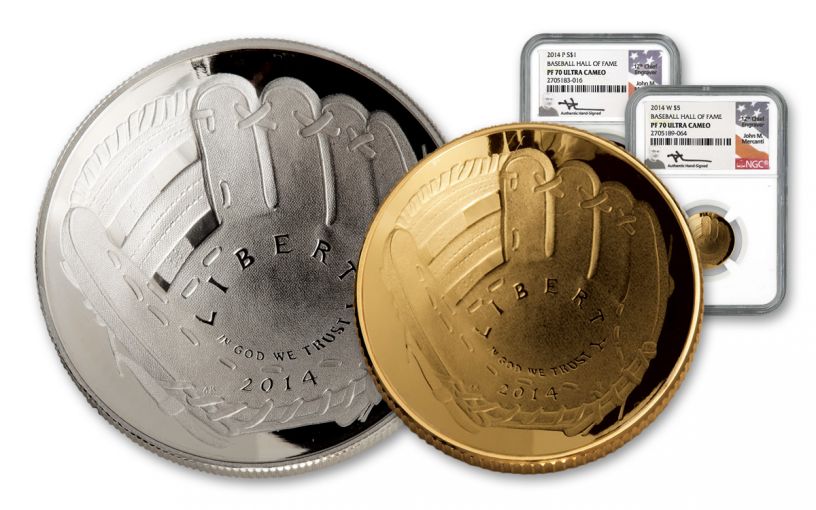 Availability: Call-In Only
This item is only available on a Call-In basis. Please call 1-800-510-6468 to speak to a representative.
Item #
352378
Add to Wish List Add to Wish List Wishlist is for registered customers. Please login or create an account to continue. Add to Compare

Never before had the United States Mint attempted something so daring. But if Mint officials were going to do something this dramatic, it only made sense to do it while honoring America’s favorite pastime. In 2014, the U.S. Mint introduced its first-ever curved series commemorating the 75th anniversary of the Baseball Hall of Fame. In a clever and instantly iconic design, the reverse features the outward curve of a baseball, while the obverse shows the inward curve of a baseball glove.

When news broke of this incredible event, it shook the numismatic community. The U.S. Mint creates arguably the most widely collected coins in the world, and the curved Baseball Hall of Fame series is perhaps the most successful commemorative it had ever released. The $5 gold pieces sold out in only five days, and the Silver Dollar Proofs sold out in less than two weeks!

Here we’ve assembled an exclusive set containing both the Silver Dollar Proof and the $5 Gold Proof Commemoratives. Plus, each has been graded by the Numismatic Guaranty Corporation (NGC) as being in flawless Proof-70 Ultra Cameo (PF70UC) condition, a distinction that means your perfectly-graded proofs will have ZERO imperfections – showing all features and fields exactly as the engraver and mint intended.

In addition, each coin has been sonically sealed in its own acrylic holder and encapsulated with an exclusive label personally signed by John Mercanti, the 12th Chief Engraver of the U.S. Mint! A giant in the numismatic world, Mercanti has produced more coin and medal designs than any person in U.S. Mint history. Plus, each set will come housed in a black presentation case and accompanied by a Certificate of Authenticity.

Just 16 sets are available, so don’t strike out; hurry and catch yours while they last. We’ve even pitching in a BONUS coffee table book, Sports Illustrated: The Baseball Book Expanded Edition – an action-packed volume that every baseball fan is sure to enjoy!

The coins in this 2014 Silver & Gold Baseball Hall of Fame Two-Piece Proof Set sold out within two weeks after their release, but now you can get them both in Proof-70 Ultra Cameo (PF70UC) condition with exclusive labels personally hand-signed by John Mercanti! This Cracker Jack of deal won’t last for long, so step up to the plate and bring yours home!