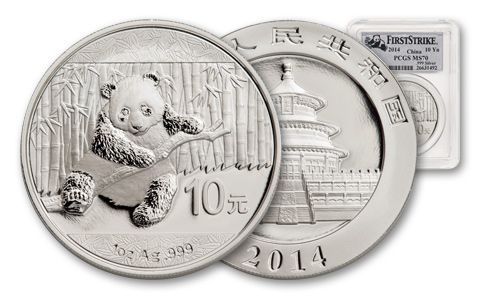 Availability: Out of Stock
This item is currently Out of Stock. Please sign up to be notified if this product becomes available.
Item #
251058
Add to Wish List Add to Wish List Wishlist is for registered customers. Please login or create an account to continue. Add to Compare

When China releases its Silver Panda coin each year, millions around the world swarm the market for these red-hot silver beauties. But even though the China Mint has raised their mintages from 600,000 to 8,000,000 in recent years, the China Silver Pandas have SOLD OUT – each and every year.

Why? The answer is surprisingly simple. The Chinese silver rush is on! The China Silver Panda has been one of the world’s most popular coins for more than thirty years. But remarkably, an old 1949 law prohibited Chinese citizens from owning their own country’s coins. So when that law was finally changed in 2004, millions of China’s prosperous new middle class buyers flooded the market!

What could make a 2014 Silver Panda even BETTER? How about a First Strike® certification from the China Mint!

The earliest coins struck off the dies, First Strikes are believed by many to be the finest examples of a mint’s work. As a result, they can carry a premium value above and beyond even the highest grades. Just a fraction of the Silver Pandas produced for 2014 will receive a First Strike designation, and because of our relationship with the China Mint, you won’t find these First Strike 2014 Silver Pandas anywhere else!

What’s more, all of our 2014 First Strikes have been sent directly from the China Mint to one of the world's leading independent coin certification companies, Professional Coin Grading Service (PCGS), accompanied by an official authorized letter from the mint’s Director!

It doesn’t get any better than that! Or DOES it?

From among all these sparkling, brand-new 2014 Silver Pandas, PCGS identified a small, but significant, number in perfect and near-perfect condition – the two highest grades a coin can earn. And people in the know always gravitate toward the highest quality!

Why? The numbers tell the story: The China Mint will produce millions of One-Ounce Silver Pandas for worldwide distribution this year. But only 50,000 of those coins will receive the First Strike certification from the mint. Of those First Strike Pandas, just a small fraction will be judged to be flawless Mint State 70 (MS70) coins and near-perfect Mint State 69 (MS69) coins by PCGS!

Small wonder the best of the best are so hard to find! Don’t miss your chance – act now to be among the first to capture one of the world’s most sought-after silver coins for 2014!

As an official distributor for the China Mint, we have the ONLY official First Strikes from the China Mint – in both MS69 and MS70 condition! Or you can choose highly collectible Brilliant Uncirculated (BU) coins! Order today and lock in your best price!