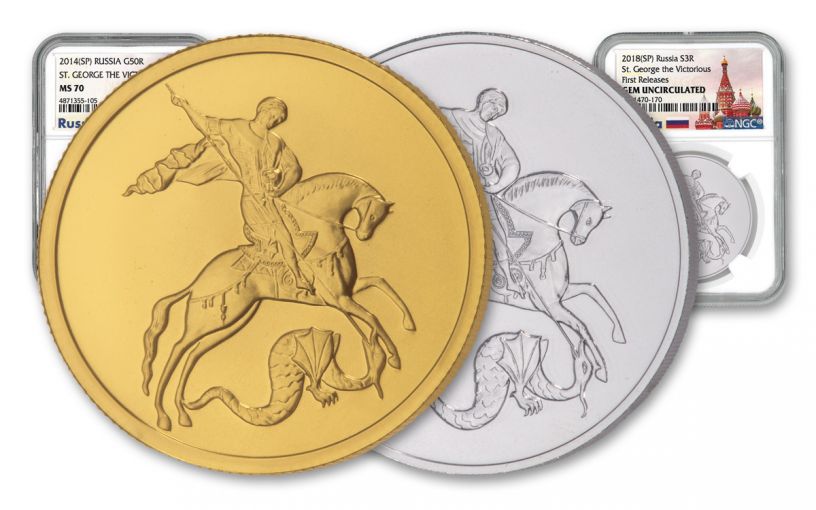 Availability: Call-In Only
This item is only available on a Call-In basis. Please call 1-800-510-6468 to speak to a representative.
Item #
342930
Add to Wish List Add to Wish List Wishlist is for registered customers. Please login or create an account to continue. Add to Compare
Product Description

Saint George is not just the patron saint of England, he is also the patron saint of many other countries, including Russia, where the Russian Orthodox Church celebrates three Saint George feast days each year. While the image of Saint George slaying the dragon has appeared on the British Gold Sovereign for more than 200 years, it wasn’t until 2006 when this iconic image finally found its way onto Russian coins.

The culturally significant design appeared for the first time after it was selected as the theme for the Central Bank of Russia’s new gold bullion coin that debuted that year. These 50-Ruble legal-tender coins were officially called “Saint George the Victorious” coins and replaced the old Soviet-era Chervonets bullion coins. In 2009, Russia released a silver version of the coin. With a face value of 3 Rubles, they were Russia’s first bullion coins struck in silver. Now you can add both the gold AND the silver coins to your collection in one spectacular two-piece set!

These beautiful coins are modern Russia’s premier bullion issues. They depict a heroic image of Saint George riding his horse over the body of a snakelike dragon; his spear raised to deliver the killing blow that will end the creature’s reign of terror. The set contains a 2014 Russian Gold Sovereign minted in 99.9% gold and a 2018 Silver Sovereign minted in 99.9% silver. Both were struck at the prestigious Saint Petersburg Mint and come in spectacular high-grade condition.

The Silver Sovereign comes in Gem Brilliant Uncirculated (BU) condition, and the Gold Sovereign has been graded by the Numismatic Guaranty Corporation (NGC) as being in perfect Mint State-70 (MS70) condition, a distinction that means your perfectly-graded coin will have ZERO imperfections – showing all features and fields exactly as the engraver and mint intended. Each coin will be encapsulated in an acrylic holder with an exclusive Russian label.

These coins are referred to as Russian Gold “Sovereigns” because, much like Great Britain’s Gold Sovereigns, they feature an image of Saint George and the dragon. They’re also struck in nearly the same size drawing further positive comparisons. Unlike their British counterpart, however, instead of a monarch, the obverse design depicts Russia’s instantly-recognizable two-headed Imperial Eagle. Due to their popularity, it is extremely difficult to export these coins out of Russia, making it nearly impossible for collectors around the world to add these truly superb coins to their collections.

Fans of gold and silver coins are sure to fall in love with these Russian Sovereigns. Reserve yours now before our supply vanishes completely.