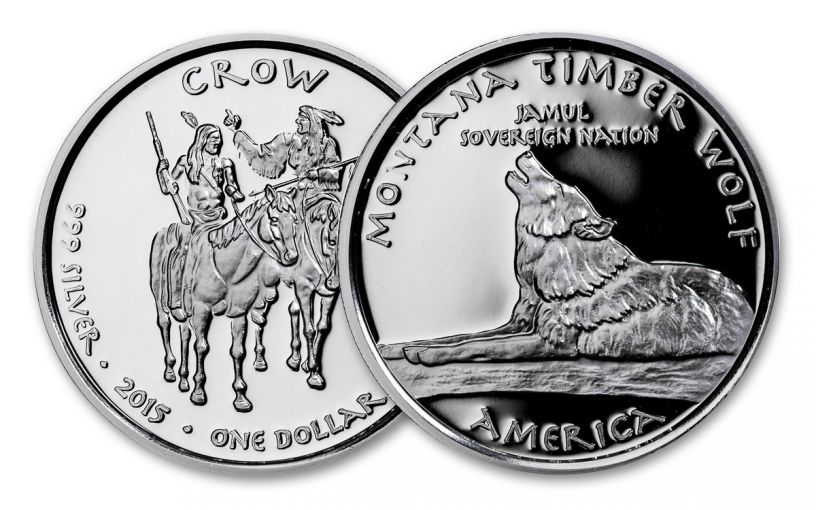 Availability: Out of Stock
This item is currently Out of Stock. Please sign up to be notified if this product becomes available.
Item #
316824
Add to Wish List Add to Wish List Wishlist is for registered customers. Please login or create an account to continue. Add to Compare

In a landmark coin series launched in 2015, the Native American Mint is honoring fifty tribes with richly detailed commemorative coins. Each release features a state, a tribe associated with that state, as well as an animal considered part of the tribe’s history and culture. With proceeds of the coins going to support Native American charities, and the coins themselves serving to increase awareness of Native American history, the series has quickly become a collector favorite. In fact, these are the only American, non-US government coins available in the marketplace.

The third edition of this popular series is the Montana 2015 Silver Timber Wolf Crow Proof.  Based in Billings, Montana today, the Crow Nation was once located as far east as the Ohio Valley, but were forced out of the area by the Iron Confederacy of the Ojibwe and Cree peoples, and pushed further west over time. Now numbering nearly 12,000 members, the Crow stands tall in central Montana—and so does the awe-inspiring timber wolf. Hunted to extinction in the 1930s, the wolf has been slowly reintroduced into the Montana wilderness and national parks since 1980. By the early 2000s, there were well over a hundred wolves in the state, with conservation efforts ongoing.

Now you can help honor both the Crow and the timber wolf with one remarkable coin, the Montana 2015 Silver Timber Wolf Crow Proof—available at GovMint.com.

The Crow tribe was forced to move several times to survive Native American aggressors, and the timber wolf also was chased from its original territory. Now both coexist peacefully on the 2015 Silver Timber Wolf Crow Proof coin. Weighing 31.1 grams, your coin extends 39 mm in diameter to showcase its exceptional detail.

Celebrate the Land of the Big Sky and preserve this piece of Native American history by contacting GovMint.com, today.