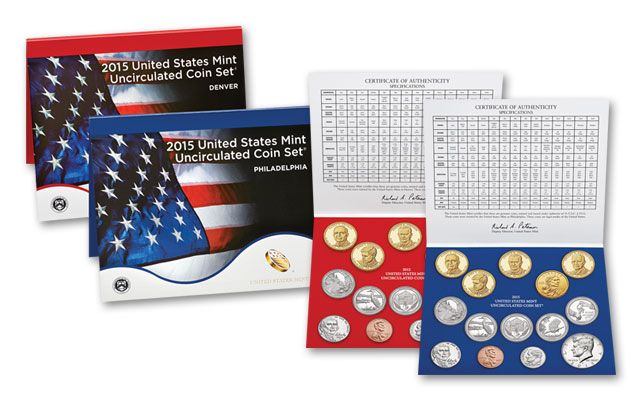 Availability: In Stock
This item will ship within 2 business days.
Item #
265917
Add to Wish List Add to Wish List Wishlist is for registered customers. Please login or create an account to continue. Add to Compare

About the sets: The coins in the 2015-PD Mint Sets were Uncirculated pieces pulled from regular production runs, thus the quality of the individual coins varies widely from set to set and even within a set.

The 2015-PD Mint Set contained twenty-eight coins, including the following:

Mintage: Not published as this book went to press

In June, the U.S. Supreme Court made marriage for same-sex couples legal nationwide, declaring that refusing to grant marriage licenses to gay and lesbian couples violates the Constitution. In horse racing, American Pharoah become the first horse since 1978 to sweep the Kentucky Derby, Preakness, and Belmont Stakes - achieving one of the sporting world's rarest feats: the Triple Crown. Early in the year, Leonard Nimoy, the gaunt-faced actor who won acclaim for his portrayal of Star Trek's Mr. Spock, died at his home in Los Angeles at the age of 83. In another notable passing, contemporary American author, E. L. Doctorow, passed away at 84. Doctorow's popular, critically admired and award-winning novels included "Ragtime," "Billy Bathgate" and "The March."

2015 started off on a tragic note with a terrorist attack on the satirical newspaper, Charlie Hebdo's office in Paris. The attack resulted in the shooting deaths of 12 people, presumed to be in response to a number of controversial Muhammad cartoons it published. In April of 2015, a powerful 7.8 earthquake shook Nepal, killing more than 2,000 people and flattening sections of the city’s historic center. In July, the United States and Cuba re-established formal diplomatic relations for the first time since ties were severed in 1961.