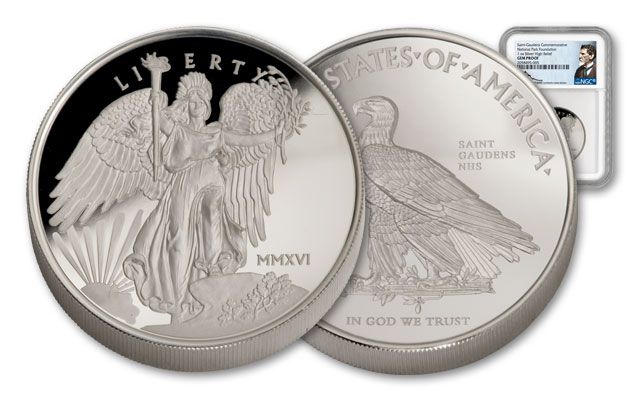 Availability: Out of Stock
This item is currently Out of Stock. Please sign up to be notified if this product becomes available.
Item #
285874
Add to Wish List Add to Wish List Wishlist is for registered customers. Please login or create an account to continue. Add to Compare
Related Articles
Product Description

America's Most Famous Saint Finally Gets Her Wings

The Saint-Gaudens museum on the grounds of the National Historic Site contains a treasure trove of sketches, plaster models, and documents pertaining to Roosevelt and Saint-Gaudens' collaboration. Much of the focus is on the undisputed masterpiece of their efforts: the 1907 $20 Gold Double Eagle.

But, there's a nearly forgotten 'secret' that many visitors to the Saint-Gaudens museum are unaware of - Lady Liberty was supposed to have a feathered headdress...and WINGS!

Recently, while exploring the archives within the Saint-Gaudens National Historic Site, we uncovered the rest of the story of the Winged Liberty. Inspired, we immediately began partnering with museum officials to see August Saint-Gaudens' and Teddy Roosevelt's original artistic vision brought to full glory in one ounce of 99.9% pure silver. As collectors ourselves, we were thrilled by the prospect of the original Winged Liberty design finally being struck in spectacular high relief - making Saint-Gaudens original vision a reality at last, after 109 years. Just one major question remained: Who could help prepare Augustus Saint-Gaudens original plaster design for modern high relief striking? There was really only one answer: 12th Chief Engraver of the U.S. Mint, John Mercanti.

The Saint-Gaudens National Historic Site recognized that striking these proofs in pure silver would require a world-class mint - one that would be able to capture every nuance of Saint-Gaudens' masterpiece in stunning high relief. Few mints in the world even attempt the striking of high reliefs. But, with over 1,000 years of history and craftsmanship, Britain's Royal Mint was an inspired choice.

After receiving John Mercanti's hand-sculpted plasters for the Wing Liberty proof, the artisans at the Royal Mint set about to bring the design alive in dramatic high relief on this one-ounce silver proof. The results are spectacular! In fact, collectors will be thrilled to discover that the Winged Liberty Silver Proofs are among the highest relief proofs of this kind ever struck by the Royal Mint.

Each 2016 Winged Liberty High Relief Silver Proof has been certified and graded by Numismatic Guaranty Corporation (NGC), then sealed in an archival acrylic holder for display and preservation. In addition, each holder bears Mercanti's hand-signed autograph directly on the label.

The mintages for the 2016 Winged Liberty High Relief Silver Proof is extremely limited. Only 10,000 One-Ounce Silver Proofs are authorized. GovMint.com is honored to be named the official worldwide distributor for this historic first-ever Saint-Gaudens release.