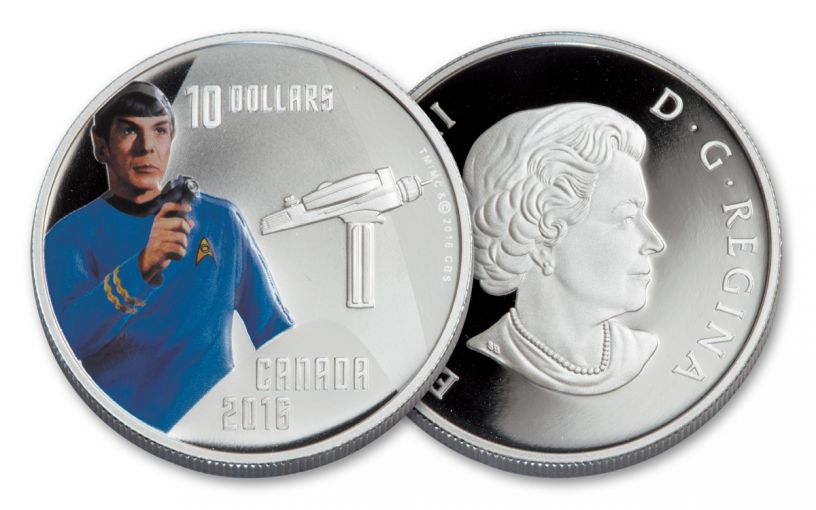 Availability: Out of Stock
This item is currently Out of Stock. Please sign up to be notified if this product becomes available.
Item #
289551
Add to Wish List Add to Wish List Wishlist is for registered customers. Please login or create an account to continue. Add to Compare

The year 2016 marked the fiftieth anniversary of the beloved television show Star Trek, a blend of science fiction and adventure that captured a generation’s imagination with its bold crew of space explorers. Perhaps no crew member was more recognizable than Spock, the half-Vulcan, half-human first officer of the U.S.S. Enterprise. Played by Leonard Nimoy, Spock became famous for his salute, "Live Long and Prosper," his Vulcan nerve pinch and his steely determination under fire.

Now you can honor both Nimoy and the character he immortalized with the 2016 $10 Canada ½-oz Silver Spock Proof coin, with a brilliant pop of color and timeless detail. The last issue of a four-coin, 50th anniversary collectible series, it’s struck in 99.99% fine silver by the Royal Canadian Mint, and joins coins featuring Captain James T. Kirk, chief engineer Montgomery "Scotty" Scott, and communications officer Uhura. You can add this iconic coin to your collection today, at GovMint.com.

A logical addition to any pop culture collection

With a legacy that is still generating new television shows, movies and novelizations fifty years later, the Star Trek series has definitely demonstrated its staying power. Now you can add the last coin of the series featuring first officer Spock—if you act fast! This coin has a relatively low mintage of only 12,500 units, and is available now from GovMint.com.