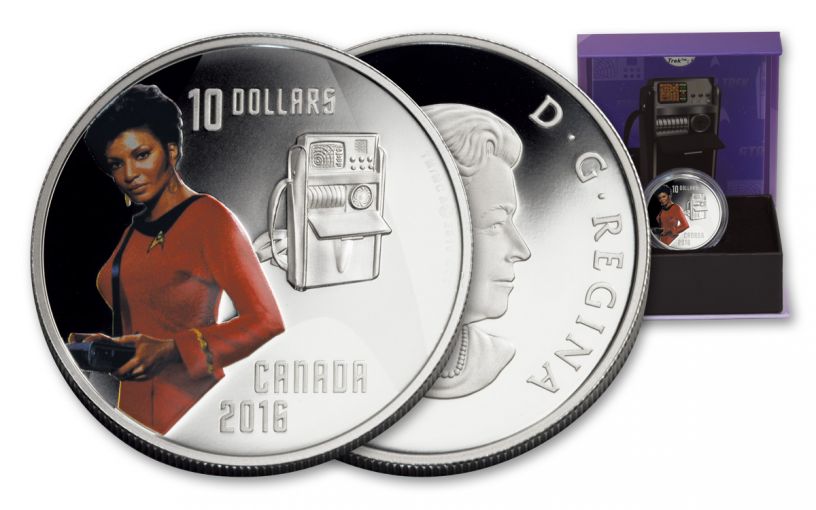 Availability: Out of Stock
This item is currently Out of Stock. Please sign up to be notified if this product becomes available.
Item #
303028
Add to Wish List Add to Wish List Wishlist is for registered customers. Please login or create an account to continue. Add to Compare

Star Trek: The Original Series debuted on NBC in 1966 to rather poor ratings. NBC nearly cancelled the show during its second season but kept it on the air due to the efforts of its avid fans. Those efforts were not enough to save the series the following year, though. In spite of its fledgling origin, the show eventually led to five other series, including three sequels and two prequels, an animated series, and thirteen films. The fiftieth anniversary of the series that started it all is celebrated by the four-coin series of which this Uhura Proof is a part.

While Star Trek appeals to a wide audience on a number of levels, one of the greatest attractions of just about any show or movie in the sci-fi genre is the forward-looking technology. This piece celebrates that asset with its image of a tricorder, a device that was used for sensing data and analyzing it. Modern devices have similar uses. Held by Communications Officer Nyota Uhura, it was ultimately a harbinger of what is real today but was only dreamed of just half a century ago. Add this coin to your collection today, or risk missing out on this celebration of an iconic series.