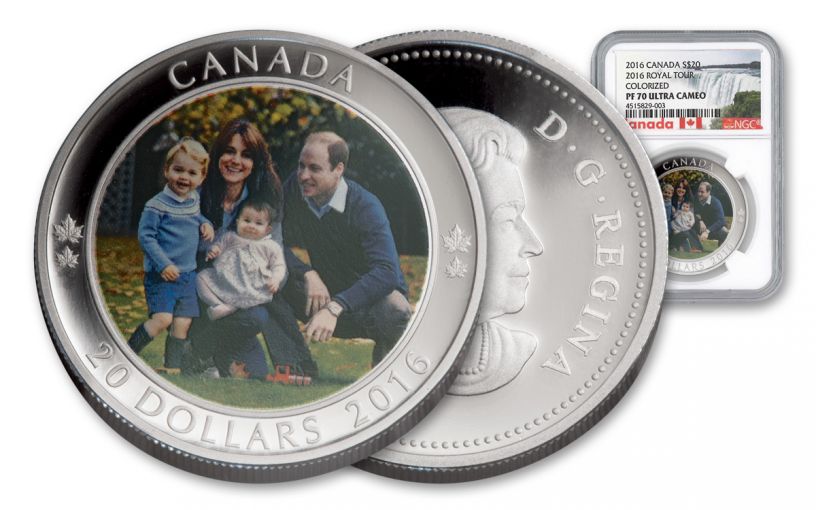 Availability: In Stock
This item will ship within 2 business days.
Item #
303086
Review this product
Add to Wish List Add to Wish List Wishlist is for registered customers. Please login or create an account to continue. Add to Compare
Complete your collection with one of these:
Product Description

In 2016, the Duke and Duchess of Cambridge, Prince William and his wife Kate nee Middleton, and their children, Prince George and Princess Charlotte, visited Canada. It was the couple’s second royal visit to Canada. The storybook couple captured the hearts of the world with their Disney-like romance and wedding. On this stunning proof, the four of them, including the two happy children, are shown together in vivid color. Along with the inscriptions on the rim are two large and two small maple leaves, one for each member of the family.

On April 29, 2011, the world tuned in to the wedding of Prince William and Catherine Middleton. Set in Westminster Abbey in London, the event had all of the pomp and circumstance that could be expected of the marriage of someone who is likely to become King of England one day. While the television extravaganza may have made the couple seem distant, this 2016 Silver A Royal Tour Proof does just the opposite. The loving pair are shown with their two young children, Princess Charlotte seated on her mother’s knee and Prince George smiling playfully like any other young boy. Don’t miss your chance to own this touching look at the royal family; place your order now at GovMint.com!