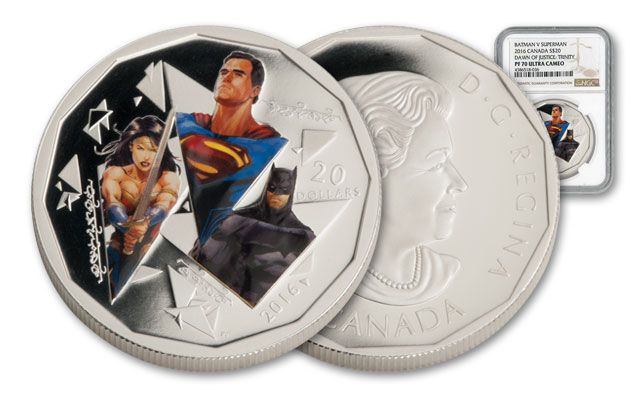 Availability: Out of Stock
This item is currently Out of Stock. Please sign up to be notified if this product becomes available.
Item #
289202
Add to Wish List Add to Wish List Wishlist is for registered customers. Please login or create an account to continue. Add to Compare

This 2016 Batman vs Superman Proof features three heroes brought together by a common purpose. WONDER WOMAN™ in a battle-ready stance as she holds her Phoenician-inscribed sword before her; SUPERMAN™ appears as a pillar of strength, his gaze steady on the horizon while the viewer's eye is naturally drawn to the iconic red and yellow S-shield emblazoned across his chest; and BATMAN™, whose gritty expression beneath his cowl adds a brooding feel to this likeness of the seasoned crime-fighter. The obverse depicts the traditional portrait of Her Majesty Queen Elizabeth II.

These are the first coins in The Royal Canadian Mint's Batman vs Superman series. The denomination, year, and the trademarks of Warner Bros. Entertainment Inc. and DC Comics are included on the reverse. Each superhero's name is engraved in Kryptonian syllabic writing next to their portrait.

The proof also includes a frosted finish which is designed to create a "shattered glass" effect. This element is symbolic of the 'shattering' of what was established in the Man of Steel™. Each proof is struck in one-ounce of 99.99% silver and is 40 mm in diameter - larger than a Morgan Silver Dollar!

Your coin is graded Proof-70 Ultra Cameo (PF70 UC) by Numismatic Guaranty Corporation (NGC). Only 12,500 have been struck, which is an incredibly small number considering the number of Batman vs Superman fans worldwide.

Secure your proof before the sell out!