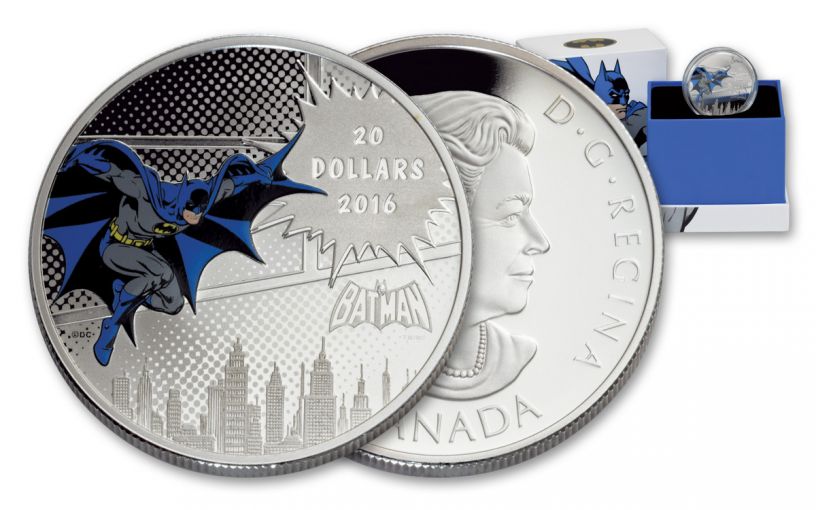 Availability: Out of Stock
This item is currently Out of Stock. Please sign up to be notified if this product becomes available.
Item #
292237
Add to Wish List Add to Wish List Wishlist is for registered customers. Please login or create an account to continue. Add to Compare

Why add this $20 Canadian Silver DC Comics Coin to your collection? Because it’s Batman.

Arguably one of the most popular of all the DC ComicsTM superheroes, the Dark KnightTM is known the world over for his stoic approach to fighting crime, his solitary, mysterious ways, and his ability to overcome even the most staggering odds to keep Gotham City safe. Your collection won’t be safe, however, until you add this remarkable coin to it…and you must act fast, because only 10,000 Dark Knight coins were minted in 2016 by the Royal Canadian Mint as part of this hugely successful series.

Struck from .9999 pure silver and featuring crisp, bold artwork made even more remarkable by the coin’s Proof condition, this $20 Silver DC Comics Dark Knight coin joins other Justice League icons, including SupermanTM and Wonder WomanTM. As always, BatmanTM stands apart…but he can stand with you if you contact GovMint.com before it’s too late.

He’s the hero Gotham City needs…and so does your collection.

The $20 Canadian Dark Knight coin is a coin for the people, and one you will display with pride. The crisply detailed full color imagery leaps from the surface of this oversized 40 mm-diameter coin, and its heft of 31.83 grams is equally impressive.

The Dark Knight is an exceptionally elusive member of the Justice League--and the 2016 Canadian $20 Silver DC Comics Dark Knight Proof coin has a relatively low mintage of only 10,000 units. So get yours now from GovMint.com!