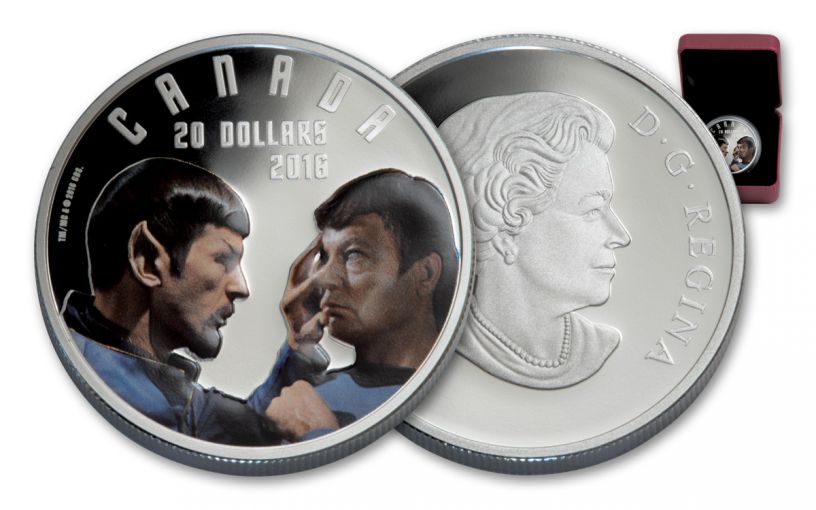 Availability: Out of Stock
This item is currently Out of Stock. Please sign up to be notified if this product becomes available.
Item #
303026
Add to Wish List Add to Wish List Wishlist is for registered customers. Please login or create an account to continue. Add to Compare
Product Description

Remembering One of Star Trek’s Most Thought-Provoking Episodes!

The Star Trek series has few parallels in terms of the size, fervor, and durability of its cult following. Although NBC cancelled what is now known as the Original Series after just three seasons, the franchise was just beginning. Three sequel series and two prequel series, one of which just launched in 2017, continue to keep the spirit of Star Trek alive for new generations. Trekkers travel to conventions every year, often dressing as their favorite characters, and the amount of Star Trek paraphernalia available half a century after its debut is difficult to overstate.

This coin continues that tradition in a particularly poignant way. The image on the reverse is taken from an episode called Mirror, Mirror in which three of the main characters are accidentally transported into a mirror universe in which crew members of the I.S.S. enterprise have the opposite qualities of themselves. Unlike most of the other episodes in the series, which celebrate the virtues of humanity, this one forces its characters – and the viewers along with them – to examine the darker sides of our natures.

Star Trek fans all remember that moment when they fell in love with the franchise, be it from one of the television shows or movies. The collection of which this coin is a part recalls three moments that drew in many avid fans. In fact, even those who are not fans of the series could not help but be intrigued by the unique storyline surrounding this remarkable scene. Do not wait to order your Silver Star Trek Mirror, Mirror at GovMint.com.