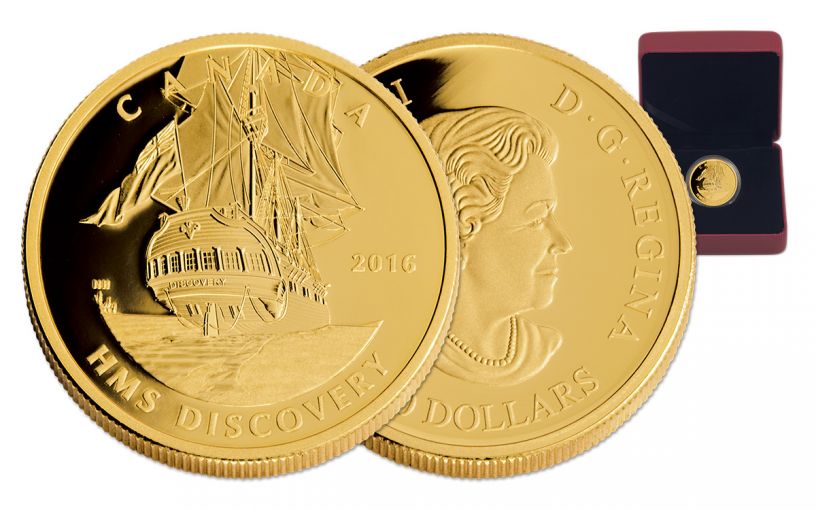 Availability: Out of Stock
This item is currently Out of Stock. Please sign up to be notified if this product becomes available.
Item #
298440
Add to Wish List Add to Wish List Wishlist is for registered customers. Please login or create an account to continue. Add to Compare
Product Description

The final coin in Canada's One-Ounce Gold Tall Ship series, this HMS Discovery proof shows the famous three-masted ship on its epic voyage of 1791-1795. During that time, Captain George Vancouver explored the Pacific Coast, going as far north as Alaska's Prince William Sound! The surveys created during the voyage would go on to be used for more than 100 years, and Vancouver himself became a national hero. So, if you were wondering, yes -- that is how both the American and Canadian cities of Vancouver, along with Vancouver Island and both Mount Vancouvers, got their name!

Struck in a full ounce of 99.99% pure gold, the HMS Discovery proudly displays her stern, the wind roaring against her topsails. It's an incredible design by Canadian artist Niel Hamelin, and comes struck in shimmering proof condition. But with a limited mintage of only 275 pieces worldwide, this nautical treasure is sure to sell out just like the previous three coins in the series. Get yours before they set sail for good!