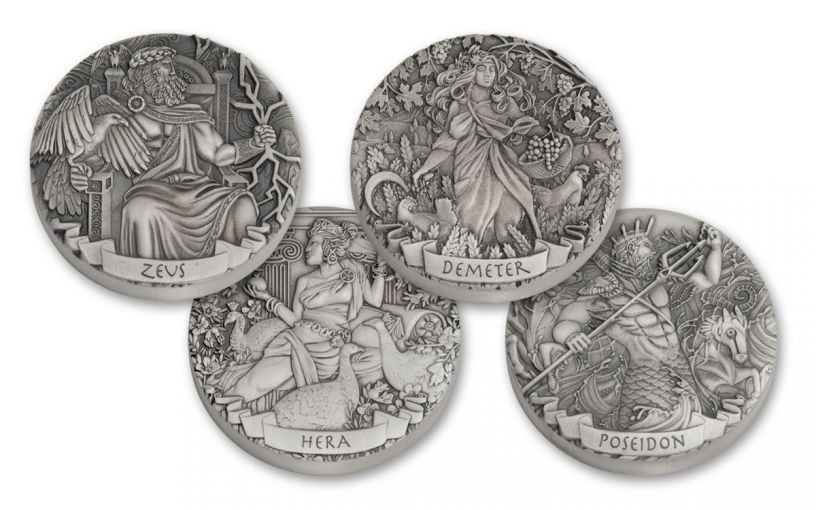 Availability: Out of Stock
This item is currently Out of Stock. Please sign up to be notified if this product becomes available.
Item #
311720
Add to Wish List Add to Wish List Wishlist is for registered customers. Please login or create an account to continue. Add to Compare
Product Description

Hold the Power of the Gods in Your Hands!

From their perch high atop Mount Olympus, the gods and goddesses of ancient Greece ruled over mortal and immortal alike. Through stories of conflict and bravery, deceit and intrigue, reward and punishment, the tales of Zeus and Hera's court provided drama and guidance for an entire civilization. And while millennia has passed since the peak of their influence, the stories of these legendary figures still entertain through their immortal poems, ballads and songs.

So it's no surprise that these deities have inspired the artisans of Australia's prestigious Perth Mint to create one of the most phenomenal silver coin series to ever arrive at our vaults. And now, as part of a world exclusive release, you can add them to your collection with these incredible antiqued silver proofs. Each $2 legal-tender coin comes struck in two full ounces of highly-pure 99.9% silver, for a total of eight ounces. This 2016 Cook Islands Gods and Goddesses Antiqued Four-Piece Set is definitely one for the ages! The four coins in your set are:

This four-coin set represent the first releases of the incredibly popular Gods and Goddesses series, a 14-coin series depicting the deities of Mount Olympus. All four designs were made exclusively for this series, and GovMint.com is the official distributor of the set.

Most impressive, though, is the fantastic high-relief antiqued condition, which gives the viewer a true sense of the power and status these legendary figures held in the ancient world. In addition, the coins in your 2016 Cook Islands Gods & Goddesses of Olympus Silver Antiqued Four-Piece Set have all been graded by the Numismatic Guaranty Corporation (NGC) as being in perfect Mint State-70 (MS70) condition, a distinction that means your perfectly-graded coins will have ZERO imperfections – showing all features and fields exactly as the engraver and mint intended!

Do you have what it takes to hold the Gods of Olympus in the palm of your hand?

This landmark set is a WORLD EXCLUSIVE that's only available through GovMint.com -- you won't find this release anywhere else! Demand for other installments of this series has been intense, and we're expecting this first release in the series to quickly disappear from our vaults. Make it yours today, or you might have to wait another millennium or two for another set like it!