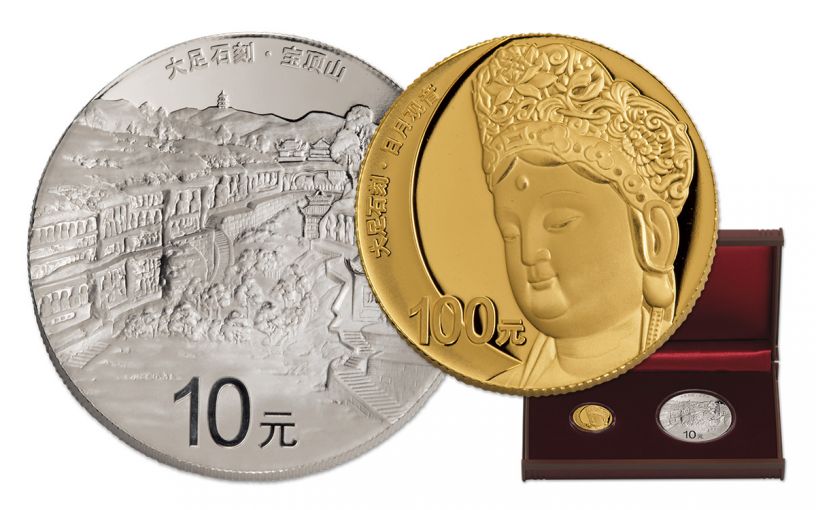 Availability: In Stock
This item will ship within 2 business days.
Item #
293119
CC Payments as low as
$331.67 / month
Add to Wish List Add to Wish List Wishlist is for registered customers. Please login or create an account to continue. Add to Compare

The DaZu Rock Carvings are a series of Chinese religious sculptures and carvings dating back as far as 650 AD! They include rock-cut cave shrines and reliefs carved into open rock faces, and depict events inspired by Buddhist, Confucian and Taoist beliefs. Off-limits for many years, the World Heritage Site was finally opened to Chinese and foreign visitors in 1980. Now, they're being honored with this newly released Gold and Silver Proof Set, which includes one 8 gram gold and one 30 gram silver proof, each struck in 99.9% fineness, with a face value of 10 Yuan and 100 Yuan, respectively. The Gold reverse features the portrait of Avalokitesvara Bodhisattva, and the silver proof's reverse features the landscape of Baodingshan (Mount Baoding), where Buddhist monks began work on its elaborate sculptures and carvings in the 12th century. The obverses display the national emblem of the People's Republic of China. Each arrives in mint packaging along with a numbered mint certificate of authenticity. Order yours today!