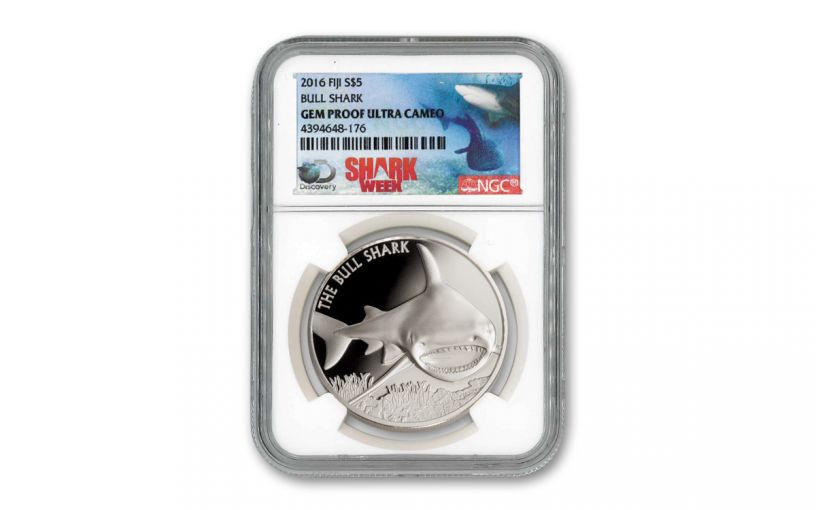 Availability: Out of Stock
This item is currently Out of Stock. Please sign up to be notified if this product becomes available.
Item #
291324
Add to Wish List Add to Wish List Wishlist is for registered customers. Please login or create an account to continue. Add to Compare

The bull shark is one of the most aggressive sharks in the world. Pound for pound, it has the strongest bite of all sharks and gets its name for its tendency to head-butt its prey before attacking. While bull sharks are mostly found in warm tropical waters, they’ve been known to venture into freshwater rivers. Their ability to thrive in both fresh and saltwater makes the bull shark one of the most dangerous sharks in the world – especially since it has a proclivity of attacking – and eating – almost anything from small fish to dolphins to even a stray human or two when they happen to pique its curiosity.

Now you can catch a glimpse of this dangerous predator without risk of losing a limb to the jaws of this chomp-crazy beast with this 2016-dated Fiji Silver Bull Shark coin. Struck in a full ounce of highly pure 99.9% silver, the coin depicts a single bull shark lazily swimming in shallow water, its mouth open and ready to strike at a moment’s notice. This legal-tender $5 coin was issued in conjunction with the Discovery Channel’s Shark Week programming and will come shipped in a leatherette box with a Shark Week outer shipper.

In addition, your 2016 Fiji One-Ounce Silver Bull Shark coin has been graded by the Numismatic Guaranty Corporation (NGC) as being in gorgeous Gem Proof condition, meaning it was expertly crafted from hand-selected planchets, polished dies and multiple strikes to produce beautifully frosted details rising over mirror-like fields.

Just 1,000 of these special proofs were struck in 2016, meaning there are few left for people trying to start or add to their collections of shark coins. Click one to your cart today!

Start or add to your collection of shark coins with the 2016 Fiji $5 Bull Shark One-Ounce Silver Proof. Swim with the sharks today and reserve your coin now!