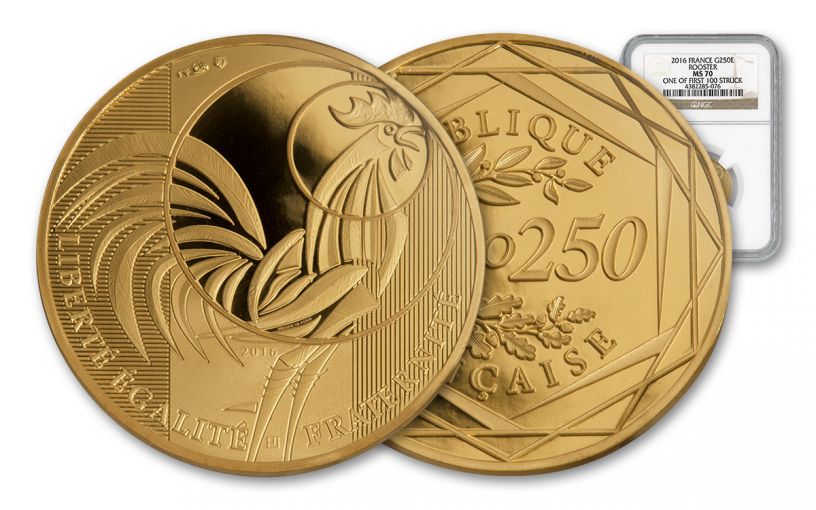 Availability: Out of Stock
This item is currently Out of Stock. Please sign up to be notified if this product becomes available.
Item #
287112
Add to Wish List Add to Wish List Wishlist is for registered customers. Please login or create an account to continue. Add to Compare

This Iconic French Gold Rooster Crows for the Last Time!

The Rooster has served as France's feisty icon since the Middle Ages. A hundred years ago it was featured on France's 20 Franc gold coin, a coin that is still immensely popular with collectors today.

Recently, collectors perked up to a new rooster call when France's famous Paris Mint struck a new series of Rooster coins starting in 2014. The 250 Euro Rooster series, struck in 4.5 grams of 99.9% gold, shows the French Rooster in three different images, starting with a cropped close-up and ending in 2016 with the full image of the bird.

The obverse of the 2016 coin shows the entire rooster and includes three hallmarks. The square hallmark is from the designer, Joaquin Jimenez. Joaquin designed the obverse of the 1991 Coin of the Year Award winner, a 1989 5 Franc coin commemorating the 100th Anniversary of the Eiffel Tower. Also included is a Horn of Plenty -- the symbol of Monnaie de Paris (The Paris Mint) since 1880, signifying the coin was struck in their factory. The other small hexagonal shape is for the engraving workshop and means this Gold Rooster was designed internally.

Now you can add this final 2016 Gold Rooster to your collection. Each coin is certified and graded by Numismatic Guaranty Corporation in perfect Mint State-70 First Strike (MS70 FS) condition, and then sealed in its holder with the special notation that your coin is "One of First 100 Struck." Discover yours today!