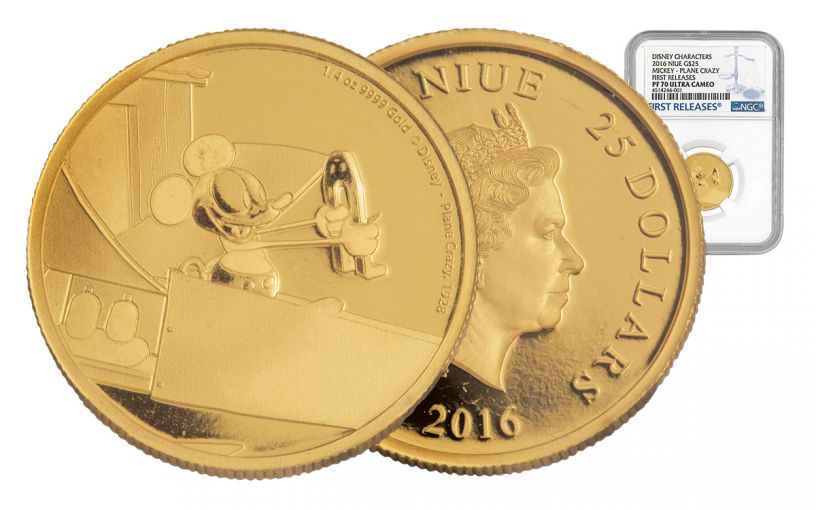 Availability: Out of Stock
This item is currently Out of Stock. Please sign up to be notified if this product becomes available.
Item #
294859
Add to Wish List Add to Wish List Wishlist is for registered customers. Please login or create an account to continue. Add to Compare
Product Description

Mickey Mouse was cinematic legend and left audiences in the ‘30s and beyond thoroughly entertained! The Plane Crazy cartoon and theme of this pure gold proof, was the first Mickey and Minnie Mouse animated cartoon ever! Needless to say, it was an immediate success, now epitomized in a first-release 99.99% gold proof for all time!

This gleaming and flawless proof depicts Mickey attempting to be Charles Lindberg by building and flying a homemade plane. After coaxing Minnie into going for a ride, he kisses her in flight, and she jumps out of the plane -- using her bloomers as a parachute! The only words utterered in the entire film were “Who, me?” by Minnie, and her voice was provided by Walt Disney himself! Originally released as a silent film before Steamboat Willie, it was re-released with sound in 1929 and was the first animated film to use a camera move. Now you can add this historical Mickey Mouse masterpiece into your coin collection with this gold proof.

DEPICTS FIRST ANIMATED CARTOON EVER MADE, THIRD IN SERIES -- This 2016 proof depicts the first animated Mickey and Minnie Mouse cartoon ever made and is the third installment in the series from the New Zealand Mint entitled Mickey Through the Ages. It celebrates hysterical and iconic moments of this beloved cartoon through the decades. 99.99% fine gold shines with Mickey attempting at being Charles Lindberg by building and flying his own plane! The reverse features Mickey holding a horseshoe steering wheel from the short film Plane Crazy, in scripted with weight, metal, purity the Disney trademarked and PLANE CRAZY, 1928. The obverse features Ian Rank-Broadley’s portrait of Queen Elizabeth II with date, $25 denomination and country of issue.

NIUE $25 LEGAL TENDER -- More than just a commemorative proof, this coin is also 25 dollars legal tender for the country of Niue, a Pacific island country about 1500 miles northeast of New Zealand.

CERTIFIED FLAWLESS – Your proof will also come certified Proof-70 Ultra Cameo (PF70 UC) First Release by the Numismatic Guaranty Corporation (NGC), a distinction that means your perfectly-graded 2016 GOLD Disney Mickey Proof will have ZERO imperfections – showing all features and fields exactly as the engraver and mint intended! It will also be certified First Release (FR) by NGC, meaning they were among the first released by the mint and were verified in the first 30 days of issue. Finally, your proof will arrive in a New Zealand Mint wood presentation box with a numbered mint certificate of authenticity.

EXTREMELY LIMITED MINTAGE, ACT NOW – We don’t want to scare you, but only 1,000 of these gleaming gold proofs were minted at the New Zealand Mint, but true Mickey Mouse fans, as well as serious coin collectors, range in the millions! So, hurry to get this piece of cartoon history, in a precious certified proof. Order this third in the series right away to add to your classic cartoon coin collection. Order now at GovMint.com.

Only 1,000! The high quality and purity of these coins is grabbing the attention of audiences of all kinds. Time will be short and these mighty coins WILL run out due to our limited quantity. Fly Hight and secure one now for your personal collection today at GovMint.com!