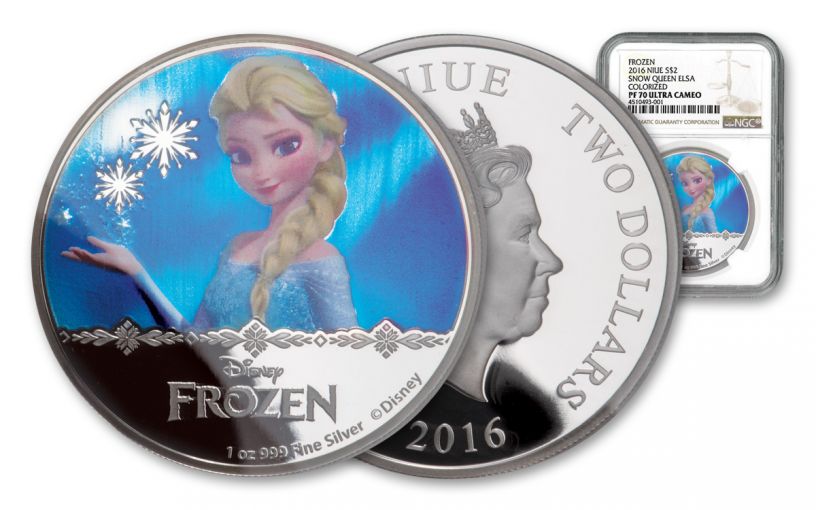 Availability: In Stock
This item will ship within 2 business days.
Item #
298567
Review this product
Add to Wish List Add to Wish List Wishlist is for registered customers. Please login or create an account to continue. Add to Compare
Complete your collection with one of these:
Product Description

When it was released in late 2013, Frozen was not only the 53rd animated film from Walt Disney Pictures, it was also an instant hit that snowballed its way to a worldwide box office total of more than $1.2 billion dollars. It’s beautiful tale of sisterly love was as inspirational as the film was entertaining. Now, you can be inspired, too, by this delightful silver coin that captures all the charm and visual beauty from the film!

The first coin in the New Zealand Mint’s popular Frozen – Magic of the Northern Lights collection, it features a portrait of Elsa the Snow Queen in dazzling full color. Inspired by the Hans Christian Anderson fairy tale The Snow Queen, the story was first considered by Disney for a feature film back in1937. Due to its length and dark themes, it was shelved for more than 70 years. When the folks at Disney finally returned to the story, they still had trouble adapting it to the screen and in early script versions, Elsa was actually the villain!

The film finally moved forward once it was decided to base the film around the love between Elsa the Snow Queen and her younger sister Anna. Frozen would go on to win two Academy Awards, one for Best Animated Feature and the other for Best Original Song, Let It Go performed by critically acclaimed singer-songwriter-actress Idina Menzel, who was the voice for Elsa in the film. Menzel and the rest of the cast will be returning for the highly anticipated sequel Frozen 2 scheduled to hit theaters on November 22, 2019.

The legal-tender coin was released on behalf of Niue, a small island nation located in the South Pacific Ocean and was struck in a full ounce of highly pure 99.9% fine silver. At 40 mm in diameter, this impressive coin was expertly crafted by the mint from hand-selected planchets, polished dies and multiple strikes to produce beautifully frosted details rising over mirror-like fields. In fact, it has been graded by the Numismatic Guaranty Corporation (NGC) as being in flawless Proof-70 Ultra Cameo (PF70UC) condition, a distinction that means your perfectly-graded proof will have ZERO imperfections – showing all features and fields exactly as the engraver and mint intended!

The Disney Frozen Silver Elsa Proof will make a thoughtful and lasting gift for any fan of the film. Just 10,000 of these coins were ever struck in 2016, however, and they’re sold out at the mint. Don’t get left out in the cold; click one of these coins to your cart now before our limited supply melts away!

This Disney Frozen One-Ounce Silver Elsa Coin is sure to melt your heart or the heart of someone you know. Don’t miss your chance to secure this coin. Order yours today!