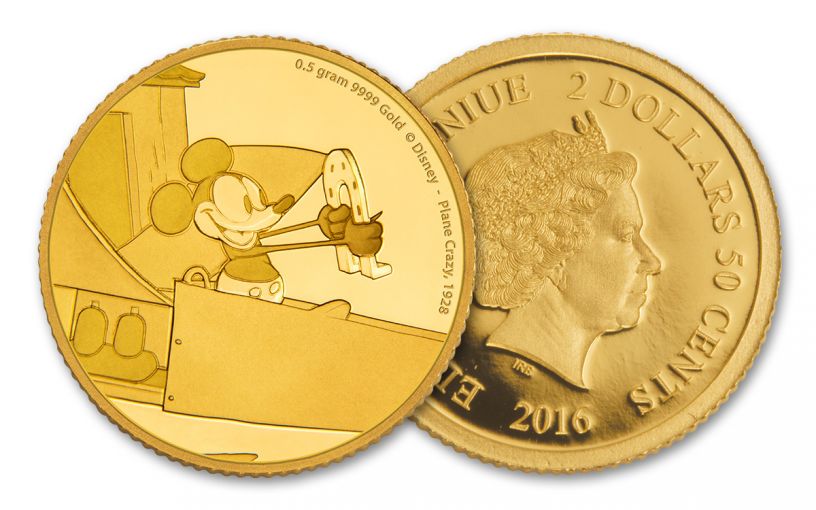 Availability: Out of Stock
This item is currently Out of Stock. Please sign up to be notified if this product becomes available.
Item #
291855
Add to Wish List Add to Wish List Wishlist is for registered customers. Please login or create an account to continue. Add to Compare
Product Description

The reverse design features a snapshot of Mickey Mouse from the black and white short "Plane Crazy" -- the first animated Mickey cartoon ever released! This is a great gift for any Disney collector or Mickey Mouse fan.

When Charles Lindbergh completed his solo flight across the Atlantic and became an instant celebrity, Walt Disney was quick to join the celebration! In "Plane Crazy," Mickey tries to emulate the "Ace of Aces" by building and flying his own homemade airplane. When that fails, he stretches out an automobile to provide his first flight. Mickey's girlfriend Minnie gives him a good luck horseshoe before flying and asks her to take the ride with him. (Minnie responds with a quick "who, me?" -- the only words said in the whole film with a voice provided by Walt Disney himself!) After some spectacular taxiing through the farm and nearby roads, they take flight. Mickey takes the opportunity to get a kiss from Minnie, but she quickly makes an exit via her parachute-like bloomers. Distracted, Mickey crashes the plane to the ground where he is firmly rejected by Minnie again after he offers her the good luck horseshoe that hit him in the head going down!

Add this great tribute to the world's most famous mouse to your collection now!