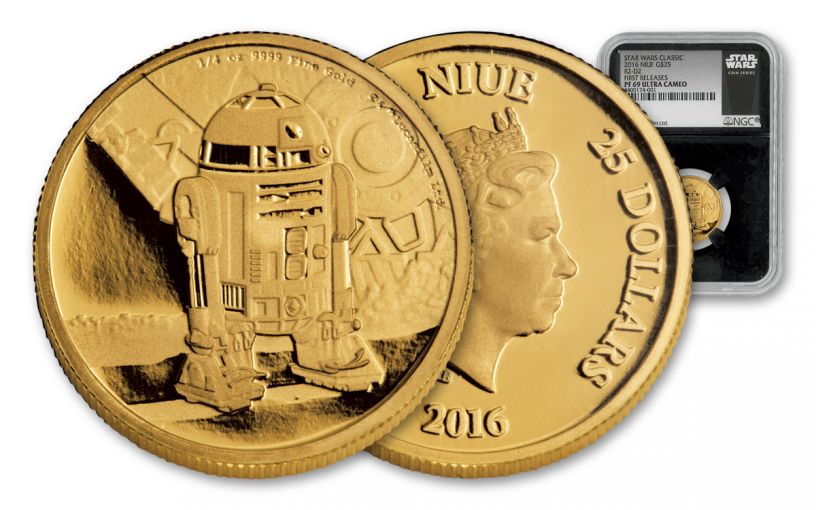 Availability: In Stock
This item will ship within 2 business days.
Item #
294244
Review this product
CC Payments as low as
$331.67 / month
Add to Wish List Add to Wish List Wishlist is for registered customers. Please login or create an account to continue. Add to Compare
Complete your collection with one of these:
Product Description

It’s hard to believe now, but 70’s studio executives didn’t quite know what to make of a space opera set in the distant past. But movie audiences knew exactly what Star Wars™ was about -- thrilling adventure, state-of-the-art special effects and captivating characters -- and helped make it the global phenomenon that it is today. One of those key elements that endeared audiences was a plucky little robot that didn’t say a word, yet showed incredible bravery. R2-D2 quickly became a fan favorite and would later become an essential element to all Star Wars films to date and to come.

So, when Lucasfilm Ltd. and the New Zealand Mint developed their series of Star Wars gold coins to be released throughout 2016 and 2017, one of the entries was obvious -- the astromech R2-D2. Now, it can be yours. The fourth classic character in the series, this special R2-D2 commemorative gold Proof coin is struck in 1/4 ounce of .9999 gold. The front of the coin depicts R2-D2 just a few minutes into the first episode of the classic trilogy, A New Hope, being introduced to a young moisture farmer named Luke Skywalker. Of course, you know what happens next – without Princess Leia’s message, Luke’s journey would never have begun!

As for the design itself, every detail of R2-D2 is perfectly captured. In addition, the use of selected planchets and specially manufactured polished dies will give your Proof a mirror effect that makes the engraving visually pop. Another interesting feature is that this coin is legal tender for the Pacific island country of Niue, with a denomination of $25 Niue. This means that the other side of this coin features a detailed portrait of Her Majesty, Queen Elizabeth II.

Your Proof will come graded as near-flawless Proof 69 (PF69) by Numismatic Guaranty Corporation (NGC) with the designation of First Releases -- a highly sought-after label that classifies the coin as being among the first struck by the mint and certified within the first 30 days of release. Your coin will also arrive sonically sealed in NGC’s secure packaging to keep your coin intact without obscuring any of its fine detail. You’ll also receive the coin’s original mint packaging, wood presentation box and numbered certificate of authenticity. Wow!

So, here’s the not-so-good news. Only 1,000 of these coins were minted for collectors worldwide and GovMint.com received a select number for our customers. We honestly don’t know how long that we will have these in stock, and with the large number of Star Wars fans out there, time might be very short. Coin collector? Star Wars fan? Both? You won’t be able to keep traveling on Spaceship Earth without this in your collection. Get it today!