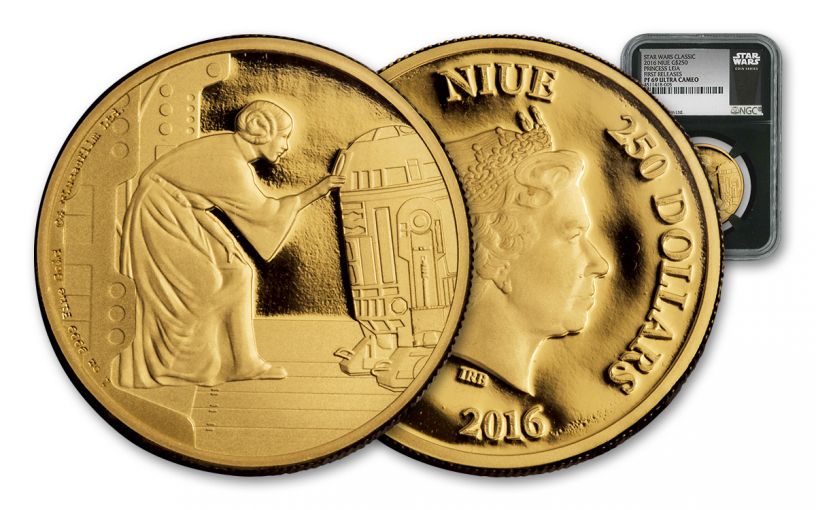 Availability: Out of Stock
This item is currently Out of Stock. Please sign up to be notified if this product becomes available.
Item #
294946
Add to Wish List Add to Wish List Wishlist is for registered customers. Please login or create an account to continue. Add to Compare
Product Description

In the Star Wars™ universe, there is no shortage of heroes – and Princess Leia Organa is the first one that film audiences saw in 1977. The Rebel Alliance spy sent plans for the Death Star to Tatooine via R2-D2, took shots against invading Storm Troopers and went toe to toe with Darth Vader -- all in the first few minutes alone! From her opening salvo, Carrie Fisher's portrayal of Leia proved that she would be a force to reckon with for films to come. Through four movies (and more to come), the princess has evolved to become a Rebel Alliance general – worn from the fight, but not losing any bit of her steely resolve and commitment to the Resistance. In the process, she has transcended from a fictional character into a hero for millions.

To celebrate this iconic character, Lucasfilm Ltd. and the New Zealand Mint have produced a special Leia commemorative silver coin – the eighth classic character in a series of Star Wars silver coins to be released throughout 2016 and 2017. This one ounce Proof coin, struck in 99.99% pure silver, depicts Leia's first appearance in 1977's Star Wars Episode IV: A New Hope. Recording her message for Obi-Wan Kenobi's help on R2-D2, Leia sets the entire legendary series into motion. Engraved in stunning, intricate detail, the scene is made all the more impressive through the use of selected silver planchets and specially manufactured polished dies. And, since this commemorative Proof is legal-tender for the Pacific Island of Niue, the other side of the coin shows a portrait of Her Majesty Queen Elizabeth II along with the official denomination of $250 Niue.

Your Princess Leia Silver Proof also comes with irresistible features that are hard to find anywhere else!

Plus, you'll receive all of the New Zealand Mint's original Star Wars themed packaging for the Proof, accompanied by a numbered certificate of authenticity. Only 500 coins will be produced for collectors and Star Wars fans worldwide. Don't miss out on this chance to add this momentous Proof to your collection. Dial it into your cart now!