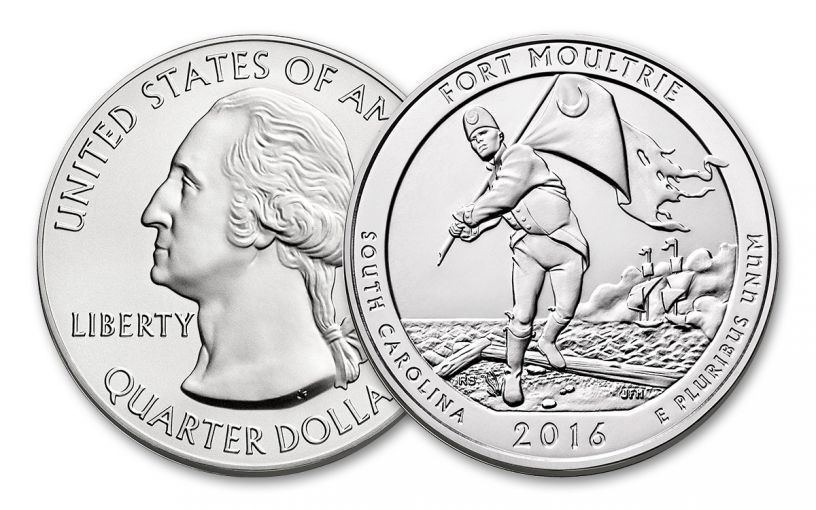 Availability: In Stock
This item will ship within 2 business days.
Item #
299832
Review this product
CC Payments as low as
$85.00 / month
Add to Wish List Add to Wish List Wishlist is for registered customers. Please login or create an account to continue. Add to Compare
Complete your collection with one of these:
Product Description

A Tale of American Heroism -- Immortalized in 99.9% Silver!

The date was June 28, 1776, and the American Revolution was in its early stages. On Sullivan's Island in Charleston Harbor, South Carolina, the palmetto log walls of a patriot fort were beginning to take shape -- until nine British warships led by Commodore Sir Peter Parker approached and began to attack. As the cannonballs started to fly, the blue South Carolina troop flag designed by Colonel William Moultrie was shot down. Risking his life, Sergeant William Jasper ran to retrieve the flag while dodging enemy fire. After bringing it back to safety, Sergeant Jasper quickly raised the flag again and Colonel Moultrie used it to rally his troops and defend the fort throughout a nine-hour battle. The city of Charleston was protected and an important early battle in the American Revolution was won. Sergeant Jasper would be remembered for his heroism, the fort would be named after Colonel Moultrie and the flag would evolve to be South Carolina's state flag.

Throughout the American Revolution and through to the Civil War, the fort would change hands between nations and between the Union and Confederacy. Today, it still stands as part of Fort Sumter National Monument as a restored and preserved monument reflecting its years of influence in the birth and perseverance of a nation. Now, 240 years later, the United State Mint is memorializing this pivotal moment as part of their America the Beautiful Quarters Program with the 2016 5-oz silver America the Beautiful Series Fort Moultrie, South Dakota bullion coin. Struck in a weighty five ounces of .999 silver, each bullion coin has a massive diameter of three inches and thickness of over four millimeters, but still has a legal tender value of 25 cents!

One side features John Flanagan's restored 1932 portrait of George Washington, while the other side depicts Sergeant Jasper as he runs with the fort's tattered but intact flag in hand as British ships of war approach. Incused edge lettering confirms that your coin is, indeed, ".999 fine silver 5.0 ounce." This uncirculated collectors version of the coin will arrive to you exactly as issued from the Philadelphia mint, with its matte-like finish and "P" mintmark. It will also come encased in a U.S. Mint box with a certificate of authenticity.

Combine the unique historic occasion that surrounds this release along with the captivating artwork and attractive size of this coin and you can see why we don't think this will available for very long. Capture this important moment in American history for your collection -- order yours today!