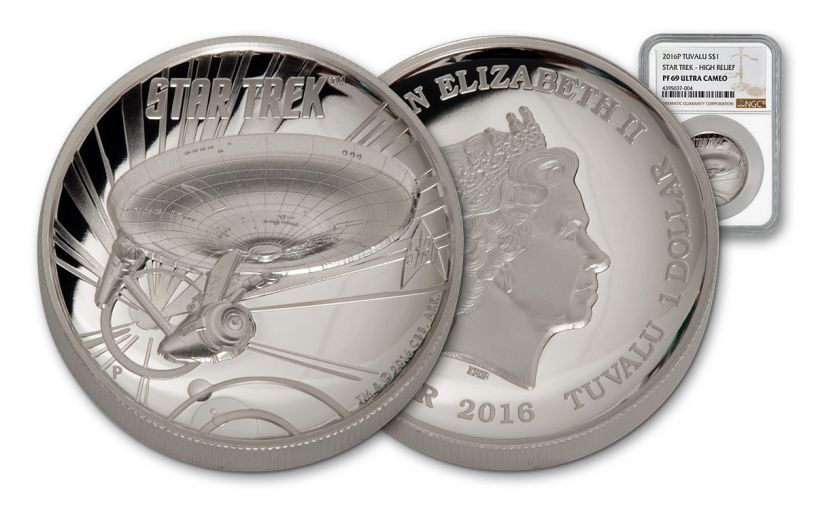 Availability: In Stock
This item will ship within 2 business days.
Item #
291826
Review this product
Add to Wish List Add to Wish List Wishlist is for registered customers. Please login or create an account to continue. Add to Compare
Complete your collection with one of these:
Product Description

Boldly Go Where Your Coin Collection Has Never Gone Before

This 2016 1-oz Silver Star Trek Enterprise Proof struck in High Relief has been released by the Perth Mint. Each coin is graded and certified by NGC to be in Proof-69 (PF69) condition with a display box and numbered certificate of authenticity from the Perth Mint.

This year marks the 50th anniversary of the original Star Trek series, which first aired in 1966. With millions of fans across the globe, this officially licensed 1-oz silver high relief proof struck by the Perth Mint is a great addition to any collection.

The reverse of the coin features the Enterprise from the original series that launched in 1966 and the Star Trek 50th anniversary logo, as well as the trademark and copyright. The reverse also includes the year, weight and purity. Also included is Perth Mint’s traditional ‘P’ mintmark.

The obverse shows the profile of Queen Elizabeth II, the date, denomination and the country of issue. At the base of the Queen’s profile are the initials ‘IRB’, these are for the obverse designer Ian Rank-Broadley.

This incredible collecting opportunity features a 99.9% pure Silver Dollar struck in High Relief by the masters at Australia's Perth Mint.

Millions of Star Track fans around the world anxiously anticipate anything connected with their favorite series, yet only 6,000 of this special High Relief Proof have been minted.

Will you be one of them?