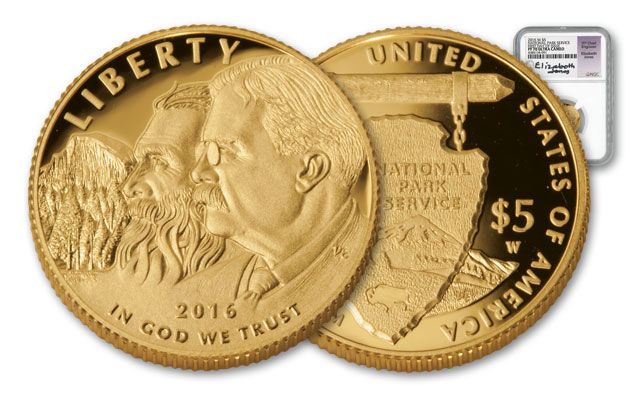 Availability: Out of Stock
This item is currently Out of Stock. Please sign up to be notified if this product becomes available.
Item #
288084
Add to Wish List Add to Wish List Wishlist is for registered customers. Please login or create an account to continue. Add to Compare
Product Description

This $5 Gold Proof struck at the West Point Mint celebrates the 100th anniversary of the founding of the National Park Service. The proof grades perfect Proof-70 Ultra Cameo (PF70 UCAM) by Numismatic Guaranty Corporation (NGC). The coin's label is signed by Elizabeth Jones, 11th Chief Engraver at the U.S. Mint. Her signature on the labels and encapsulated with the coins in their holders. All the coins are also from the First Day of Issue (FDI).

In 1916, President Woodrow Wilson signed legislation creating the National Park Service. On the 100th anniversary of this signal event in our nation's history, the United States Mint struck commemoratives honoring the park service, those pioneers of conservation who made it possible and those who have protected their legacy ever since. To celebrate the Anniversary the Mint struck Proof and BU versions of a $5 Gold coins (featuring John Muir and Theodore Roosevelt), A Silver Dollar (featuring 'Old faithful' and a bison), and a clad 50-Cent Piece (featuring a hiker and small child discovering a frog).

Elizabeth Jones was the Chief Engraver from 1981 to 1990. She holds two distinctions: She is the only female Chief Engraver to ever hold the position and she was the last Chief Engraver appointed by the President of the United States. In her case, Ronald Reagan appointed her in 1981. As a testament to this achievement, each NGC coin label prominently features her hand-signed signature.

What a great way to celebrate 'America's best idea'! Order yours today.