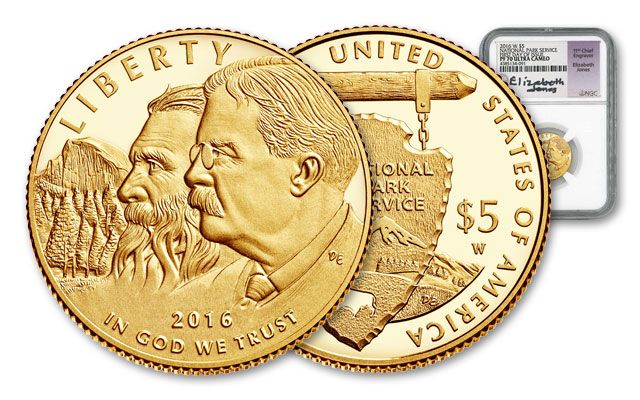 Availability: Out of Stock
This item is currently Out of Stock. Please sign up to be notified if this product becomes available.
Item #
288224
Add to Wish List Add to Wish List Wishlist is for registered customers. Please login or create an account to continue. Add to Compare
Product Description

In 1916, President Woodrow Wilson signed legislation creating the National Park Service. On the 100th anniversary of this signal event in our nation's history, the United States Mint struck commemoratives honoring the park service, those pioneers of conservation who made it possible and those who have protected their legacy ever since. The National Park Service is an agency of the United States federal government that manages all U.S. national parks, many American national monuments, and other conservation and historical properties with various title designations. The NPS is charged with a dual role of preserving the ecological and historical integrity of the places entrusted to its management while also making them available and accessible for public use and enjoyment.

The obverse (heads) features John Muir and Theodore Roosevelt with Yosemite National Park's Half Dome in the background. Inscriptions are 'LIBERTY,' '2016' and 'IN GOD WE TRUST.' The reverse (tails) features the National Park Service logo. Inscriptions are 'UNITED STATES OF AMERICA,' 'E PLURIBUS UNUM' and '$5.' Each coin is struck in 8.359 grams of gold at the West Point Mint.

This example grades perfect Proof-70 Ultra Cameo (PF70UCAM) by Numismatic Guaranty Corporation (NGC) and is signed by Elizabeth Jones, 11th Chief Engraver at the U.S. Mint. Her signature is on the label and encapsulated with the coin in the holder. The coin is also from the First Day of Issue (FDI).

Since 1792, there have ONLY been 12 official and prominent Chief Engravers of the U.S. Mint. This prestigious position is highly important as the Chief Engraver oversees the production of all coinage for circulation and for collectors. Jones was the Chief Engraver from 1981 to 1990. She holds two distinctions: She is the only female Chief Engraver to ever hold the position and she was the last Chief Engraver appointed by the President of the United States. In her case, Ronald Reagan appointed her in 1981. In conjunction with many achievements, she oversaw the unleashing of arguably the most coveted coin series in the world, the Silver Eagle and Gold Eagle. As a testament to this achievement, each NGC coin label prominently features her hand-signed signature.