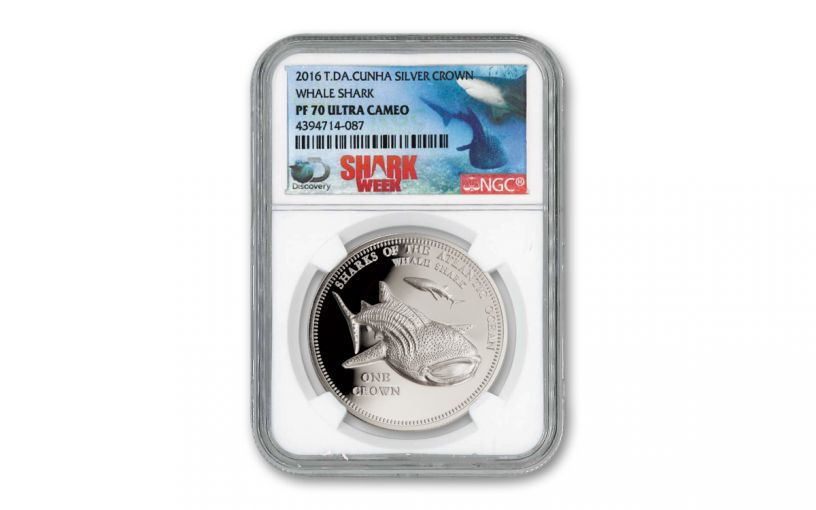 Availability: Out of Stock
This item is currently Out of Stock. Please sign up to be notified if this product becomes available.
Item #
291331
Add to Wish List Add to Wish List Wishlist is for registered customers. Please login or create an account to continue. Add to Compare
Recommended Products
Product Description

A Whale of a Shark Released for the Discovery Channel’s Shark Week!

When people think of sharks, the most common images swimming through their minds are ones of ferocious Great White Sharks, savage Tiger Sharks, or bad-tempered Bull Sharks. But seldom do people think of the biggest shark of all: The Whale Shark. Well, that all changes now as ol’ Whaley finally gets his due on this 2016-dated coin released in conjunction with the Discovery Channel’s popular “Shark Week” programming.

Issued as part of Tristan da Cunha’s Sharks of the Atlantic Ocean series, this impressive Whale Shark coin is struck in a full ounce of highly pure 99.9% fine silver. It depicts a pair gigantic whale sharks swimming in their natural habitat. Whale Sharks are not only the largest shark, but they’re also the biggest fish in the sea. It can be as long as a school bus and weigh as much as 50,000 pounds. Though they are enormous, they aren’t ones to feed on humans. Instead, these gentle giants feast on a diet of krill, plankton and small fish that it filter feeds like a baleen whale. So docile are these sharks that they’ve even been known to allow swimmers to hitch a ride!

Your 2016 Tristan da Cunha One-Ounce Silver Whale Shark Coin has been graded by the Numismatic Guaranty Corporation (NGC) as being in flawless Proof-70 Ultra Cameo (PF70UC) condition, a distinction that means your perfectly-graded proof will have ZERO imperfections – showing all features and fields exactly as the engraver and mint intended. Officially approved by the Discovery Channel, only 1,000 of these shimmering proofs were minted – and GovMint.com is the exclusive worldwide distributor! This legal-tender 1 Crown coin will come shipped in a leatherette box with a Shark Week outer shipper.

Don’t wait to add this coin to your collection of shark-themed coins. With only 1,000 minted, these sharks are swimming away fast. Cast your net and order yours now!

Start or add to your collection of shark coins with the 2016 Tristan da Cunha Whale Shark One-Ounce Silver Proof. Swim with the sharks today and reserve your coin now!