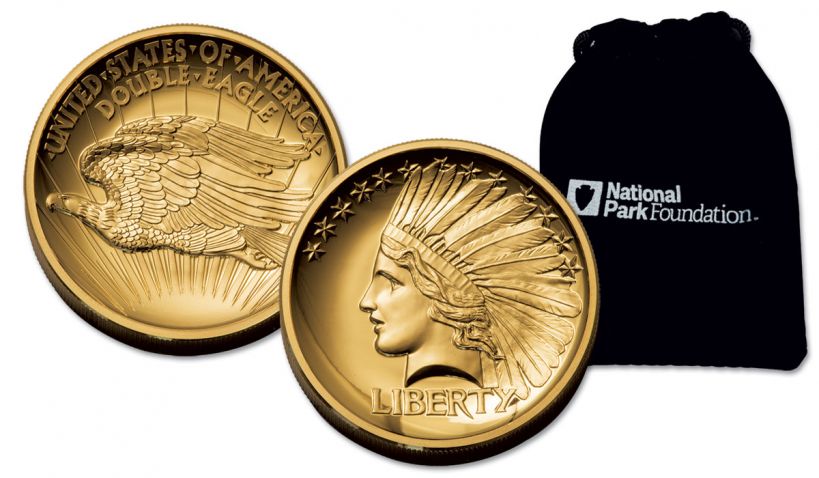 Availability: Out of Stock
This item is currently Out of Stock. Please sign up to be notified if this product becomes available.
Item #
314339
Add to Wish List Add to Wish List Wishlist is for registered customers. Please login or create an account to continue. Add to Compare

The Round that the World Has Awaited for Over a Century!

President Theodore Roosevelt paid a visit to the Smithsonian Institution in 1905, and what happened during that visit would change numismatic history forever. While there, he carefully examined ancient pieces in an exhibit of Roman and Greek coins. He was blown away by the high relief of their designs. When he reached into his vest for a feel of an American coin, he couldn’t help but curse when he realized the contrast. He decided then and there that American numismatics needed significant improvements, and he went about making them happen.

Toward that end, he enlisted the help of a friend that he had made relatively recently, sculptor Augustus Saint-Gaudens. Saint-Gaudens was widely known at the time and considered a master by his peers. His work on the new project lived up to that reputation in every way. In fact, he was so proud of this design that he wanted it to be on the double eagle. It was beaten out for selection only by another design of his, the one that to this day bears his name. At his insistence, though, a single Indian Head Double Eagle Pattern was struck, while the design featured on the $10 coin for years to come. Today, though, the Mayer Mint, John Mercanti, and GovMint are coming together to offer collectors the chance to own this stunning design in full size and high relief.

Augustus Saint-Gaudens was a once in a generation – some might say once in several generations – artistic genius, and the designs on this coin are two of the finest that he ever produced. That he himself preferred this design to the one that today bears his name indicates just how highly he thought of it. In fact, the one that was struck, even though it did not meet his vision for relief, is today valued at over $20 million. Today, you have the opportunity to own a round that fulfills the vision that he had in .9999 fine gold. With a limited mintage of 750 coins, though, that opportunity will soon pass, so act now!